The Waitaki River is regarded by salmon anglers as “big water.” The mighty Waitaki frequently carries the most water of any of the big east coast salmon rivers.

Each season the Waitaki River yields some very big fish. Some of which are over 40lb (18kg). To some extent, ECNZ can regulate the river’s flow from the hydroelectricity generation system up in the headwaters.

Up until about a decade ago, there was a four-day salmon fishing contest held in the Waitaki River during March each year. The competition was centred around the hall at Glenavy on State Highway One. From here contestants would fish for 28 kilometres upstream from the mouth.

As described above, the Waitaki River offers big water with plenty of space to find a likely looking hole. The gut near the mouth is usually extensive. Here the water is fast moving, deep, and wide, as the many braids and channels come together to form a single gut where the river enters the sea.

Sea conditions permitting, many anglers prefer to fish on the seaward side of the long shingle spit which divides the gut from the sea. Here long 12’0″ (3.66m) rods are the preferred tackle. With ticers, particularly weight-forward ones, being the most fished hardware.

In the gut itself most add a heavy lead weight (2-3oz) a metre above their lure in order to get down to where the fish are in this fast flowing channel. Many also use double Zed spinners for the same reason.

Other good choices are Colorado blade spinners and feathered lures taken down with a lead weight as described. The later lures tend not to plane to the surface like a Zed spinner. Upstream the Zed spinner is by far the most popular terminal tackle.

In the “big” fast water of the Waitaki River, the jet boaters are usually the more successful. This is particularly so when the main channel, which can be carrying over 500 cumecs (500 cubic metres of water per second), is running straight out in the same line at the river rather than “bending” to the right and following the shingle spit. At such times the river is far too deep to wade and shore-based anglers can’t get a shot on the salmon as they hug the bottom and come up the middle of the main current.

Many anglers also have a strong preference towards the type of fishing they enjoy the most. For example, some will continue to fish the surf even when it is rough and largely unfishable when they would be better off to fish in the river. When there is a long line of anglers such as shown in the picture most of the salmon caught on a given day will be taken along a short stretch, either at first light or for perhaps an hour or so at the top of the tide. While much of the rest of the day will be spent with only the odd fish caught here and there.

The Waitaki River straddles the border between South Canterbury and North Otago and is the home of the mighty quinnat salmon. They have been homing in on the river ever since the first fish returned from the sea in May 1905.

The salmon run resulted from a determined government effort to establish the fish in New Zealand. Earlier attempts to get the species established had failed.

About one million eggs were hatched at Hakataramea and Lake Ohau in 1901 and then released into streams feeding the Waitaki River.

The man responsible for this act was Lake Falconer Ayson. In 1897 the Marine Department set up a fishery division and appointed Lake as Chief Inspector of Fisheries, to develop the sea fish, oysters and salmon fisheries.

He was sent on a tour of Europe, Great Britain and America in search of suitable fish species to introduce to New Zealand. His major success in this direction was the establishment of quinnat salmon in the South Island rivers including the Waitaki.

He made four trips to the United States and Canada. On each trip, he returned to New Zealand with one million eggs. On another occasion when he was not able to make the trip, his son Charles brought in a similar shipment.

Charles Ayson was in charge of the Salmon Hatcheries for thirty years while ova were hatched and distributed in the various rivers.

A 12 lb hen salmon which returned to the Waitaki in 1905 became the first to be trapped. The following year 17 fish were trapped in the Hakataramea River. From then on the numbers returning each year steadily increased. 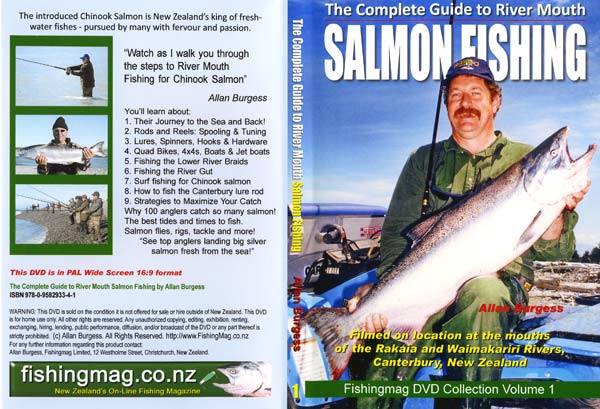 The video runs for one hour and 6 minutes (66 minutes in total).  This video was originally released on DVD in 2012.