The Waitaki River straddles the boundary between North Otago and South Canterbury. Anglers who otherwise fish for salmon in the east coast rivers further to the north will be struck by the sheer scale of the Waitaki River when fishing it for the first time. It’s big! It’s also boisterous and swift in many places. Unlike the other rivers, you cannot generally wade from bank to bank across the Waitaki; the water being too fast and deep.

Hydro schemes in the headwaters mean that the river is more refined, and its flow can be controlled at the dams: It tends also to be clear when other rivers to the north are dirty and unfishable. 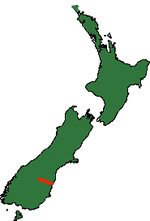 Quinnat salmon and Atlantic salmon were introduced into New Zealand starting as early 1875. Releases were made in North and South Island. These early releases were unsuccessful.

The Governments Chief Inspector of Fisheries, Mr L.F. Ayson, decided that rather than releasing a few smolts here and there, in different rivers throughout the Dominion, he would instead concentrate his efforts on just one river. Having decided that the Waitaki offered the best chance for a successful introduction, a hatchery was constructed at Hakataramea, which is a tributary, and the first shipment of ova arrived in 1901. By 1905 the first quinnat salmon were being caught at the mouth. It is interesting to note that this development was not warmly received by all the angling fraternity, some of whom believed that the introduced salmon were ruining the trout fishing in the Waitaki system! By 1907, when importations ceased, two million ova had been hatched at Hakataramea.

Until 1941 returning salmon were caught in traps up-river and stripped. The resulting ova were hatched and the smelts used to stock other rivers, even though salmon spread north to other rivers naturally.

The aforementioned high flows in the Waitaki River, up to 500 cumecs, mean that salmon fishing here can be quite an experience. The flow at the gut is usually very fast and high compared with the Rakaia.

I noted that many anglers fishing this torrent near the mouth were using heavy line, up to 50 ib (24kg) on their threadline reels is not uncommon. Particularly those fishing the south side of the mouth. Here the river fair belts past the huge assembled throng of, at times hundreds, of expectant fishermen. During the annual competition, I saw many bust-offs along this stretch. One guy even hooked and lost three big fish in almost as many minutes.

Typical tackle at the mouth was a heavy 68g ticer above which was a heavy one-ounce “D” lead. I noticed that a few anglers were using two leads in an effort to get their lure down near the bottom.

Salmon travel upstream close to the riverbed and it’s hopeless fishing this fast water unless you get your gear down. It sure is a strange form of fishing for those new to it. Ticers and Zed spinners also take a real beating from being constantly bashed along the stones, and knots have to be regularly checked for stone bruises. I saw many fish played for a short period and lost.

I’m a salmon angler who prefers to fish the mouth. I just love the supercharged atmosphere that often prevails during periods of fast and furious action. Fish caught along this narrow 300-metre strip of shingle cannot be “played” as such. Especially at low tide, the river is racing by at over 12 knots. When a fish is hooked, anglers quickly shout “fish-on” and start sprinting for the end of the line were the rushing torrent meets the breakers. It is the duty of all fellow salmon anglers on hearing this call, and sighting the rapidly approaching, and highly excited angler, to get the hell out of the way.

Once down into the surf it becomes a weighting game. Too much brute force applied to a 30 plus pound fish will result in a bust-off for certain. The name of the game is taking it easy. Mind you, some blokes can take this soft approach to the extreme, making a real meal of it by playing even the small fry for over an hour. Still, I guess, better safe than sorry!

The north side of the mouth is fishable on fewer days. New blokes are better to try their luck on the south side of the mouth first. Like the other salmon rivers access to the mouth, particularly from the south, requires a walk of a least a kilometre or so from the car park. This is always heavy going in loose shingle while wearing waders and carrying rod, reel, spinners, food and drink for a day. For this reason, many anglers have invested in four-wheeler farm bikes with balloon tires. Quad bikes at the mouth of the Waitaki River.

The heaviest salmon caught during the 1995 annual fishing contest was taken by Michael McVie from Oamaru. It weighed 16.78kg (36.91b) just over three pounds short of winning a four-wheel-drive Nissan Pathfinder. The salmon taken since the bumper year of 1995 have become smaller for some reason. But this trend goes in cycles.

If you are a keen salmon angler thinking of visiting New Zealand I recommend you time your trip for the months of February and March. The big Waitaki Salmon Fishing Contest is held over four days around mid-March, while the big annual Rakaia Salmon Contest is held at the end of February. These are both great events, well organised, and played out in a tremendous friendly atmosphere.

The Waitaki is perhaps home of the jet boat. As mentioned above access to this wide braided riverbed is more difficult by foot than the other salmon rivers. A jet boat makes so much more water available for fishing. I’m told that you can catch more salmon if you own a jet boat. I’m sure this is true for the Waitaki River. At the river mouth, jet boats are sometimes lined across the river just above the gut eight boats deep. As one pulls out of line another quickly takes its place.

The Waitaki River isn’t everyone’s cup-of-tea! It is big water in an even bigger landscape. However, for those prepared to make the effort, the Waitaki produces some of the biggest salmon of all.

The Waitaki River is approximately three hours drive south from the large population centre of Christchurch. As such it is not fished by day-trippers from that city as is the case with the Rakaia and Rangitata Rivers.

The most popular water is between the mouth and the state highway bridge on the south side of the river. Hence you have more chance of fishing a hole all to yourself at first light, and casting to a fish that has never seen a zed spinner before when you chase big salmon in the mighty Waitaki River!

The Waitaki River flow rate can be affected by the hydro schemes in its headwaters. When the storage lakes upstream are full, the electricity generation company can release water thereby causing the river to rise downstream. This artificial raising and lowering of the river doesn’t occur in the other salmon rivers to the north. This gives the Waitaki River a somewhat different dimension. The catchment is different from the Rakaia River, and also the Waitaki Lakes act as settling ponds, meaning the Waitaki River flow can be high yet still be quite fishable for salmon.

I remember fishing the Waitaki River gut on several occasions when the massive flow somewhere between 400 and 500 cumecs was not only fishable but was also producing plenty of salmon. Anglers where fishing with up to several ounces of lead to take their spoons and small Colorado blade spinners down to the bottom. When a fish was hooked the angler would go running past with it in the hope of playing and landing his fish in the surf. So powerful was the flow of rushing water through the gut.

Another problem salmon anglers fishing the lower Waitaki River can experience is the width and depth of the river can be such that it is impossible to fish the main flow without a jet boat. The lagoon can at times be a bit like a lake with a river flowing through it. A jet boat isn’t essential for salmon fishing but in the lower Waitaki River more so than any of the other rivers a jet boat can make a huge difference to your catch rate. I remember when the competition was still going there were jet boat anglers who would catch their limit on all four days, anchored just off the main flow, near the river mouth – while those shore fishing the gut at the same time would be lucky to take a fish!

The surf can really fire up sometimes too with huge numbers of salmon caught. It all depends on the shape of the mouth and the river’s flow rate.

Fishing for salmon in the Waitaki River is restricted to the 31st of March. Traditionally the Waitaki River fished best for salmon later in the season with many anglers travelling from Christchurch to fish for salmon during April. This change came about following the poor returns in the 2000 and 2001 seasons as a conservation measure. The last big Waitaki River Salmon Fishing Competition was held in 2001. It was stopped for the same reasoning. The Waitaki River is in the Central South Island Fish & Game Region.

Salmon fishing in the Rakaia River is permitted all year downstream of the Coleridge Tailrace confluence. The Rakaia River is in the North Canterbury Fish & Game Region. The discrepancy in the length of the salmon seasons between these two rivers makes no logical sense whatsoever.