The Plucky was a popular casting lure sold in New Zealand from the early 1950s until the late 60s. Few examples of this great fishing catching lure have survived down the years. Older readers as sure to remember it well. It was, however, a lure that was reasonably expensive in its day. The Rublex Flopy and Plucky were top of the range expensive fishing lures in their day.

The Plucky was made in France from natural rubber. This material gave the Plucky a soft texture but unfortunately the rubber was prone to deterioration if not well looked after by keeping the lure wrapped in tissue paper and kept away from damaging ultraviolet light. The Plucky could quite literally melt away.

It was available in two hand-painted colours: brown or green. Each measured a mere 50mm in length. They came in three weights: 1/6, 1/3 and 1/ 2 ounce.

Back in those days, few anglers would fish these lures by trolling as we would a bibbed minnow today. Instead, they would be cast from lakeshore and riverbank. They weren’t heavy enough for casting on the light-weight parabolic action rods of the day. The preferred method would be to fix a lead weight of approximately half an ounce up the line in order to provide sufficient weight for a lengthy cast. I think the minimum distance the weight could be from the lure in those days was 15 inches.

The Plucky was a relatively expensive lure. In the 1960s each would cost about 12s/6p which was quite a lot. For the same money, you could easily purchase six 1 oz hex wobblers.

The hinged tail gave the Plucky an incredibly fish-like action when retrieved. It looked for all the world like a darting cockabully. Indeed the Plucky was a favourite with many expert anglers who fished the Lower Selwyn River in those days. The little lure resembled perfectly the local bullies which were standard fare for the numerous fat double-figure brown trout that cruised the lower river and murky waters of Lake Ellesmere.

When hooked the body of the Plucky would ride up the line preventing the fish from using it as a lever to regain its freedom.

The Flopy and Plucky were distributed in the South Island of New Zealand by R.J. Bains. At that time Bains was the South Island ‘s largest manufacturers and distributors of fishing tackle. The Flopy was also made from natural rubber. It came in three colours: green, orange and yellow.

This lure was also produced in France from the 1950s until the late 1970s. Originally it too was made from natural rubber but later models were moulded in plastic.

The Flopy had an interesting and valuable feature in that the angle of the bib was adjustable on all models. To adjust, the bib was pulled out, the position changed, and then the bib was pushed back in again to lock it in place. 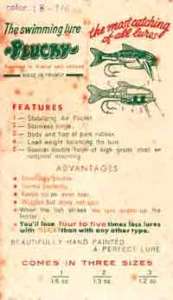 With the bib forward it caught more water and so dived deeper when retrieved. It did the opposite when the bib was adjusted all the way back!

The newer plastic versions were never as popular with anglers as the smaller pliable rubber models, and the change to plastic saw a decline in sales. However, both models were good fish takers.

Both the Plucky and the Flopy are popular with collectors as great examples of New Zealand’s angling heritage. The most collectable – and rare – examples still have their original packaging and instructions. It pays to keep the packaging on new tackle.

I thought you might find this article of old fishing lures interesting. Wait until you see what some of these are selling for. 9 Vintage Fishing Lures Worth a Small Fortune