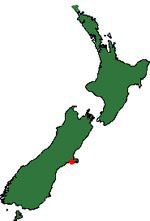 In my younger days I spent many an afternoon and evening surfcasting at Birdlings Flat – also called Baileys Beach. I remember the rich red sunsets in particular very well. The best fishing here is usually later in the day. So the setting sun generally heralds the start of improved fishing.

The most likely species to be caught during the day are kahawai. Looking back at my old fishing diaries, rather than relying exclusively on memory, I would catch kahawai on most days. Sometimes heaps of them when a school came close enough to be within casting range. I’d mostly take the kahawai on baited hooks set on three hook paternoster rigs.

This steeply shelving shingle beach runs along the seaward side of the narrow strip of land that divides the vast expanse of Lake Ellesmere from the sea. It is an open rather featureless area dominated by the cut-off spurs of Banks Peninsula to the east.

This area has a rich Maori history. There was a pa (fortified village) called Oruaka up on the hill overlooking Lake Forsyth and another pa at Taumutu, at the far end of the 30 odd kilometres Kaitorete Spit. This whole area was a massive food basket to Maori.

Prior to European settlement in Canterbury, some 150 years ago, Lake Ellesmere (Te Waihora ) was much larger. It stretched all the way back to where Lincoln University is today. Back then, of course, the Waimakariri River wasn’t confined within stop-banks. Sometimes following heavy rain in the Southern Alps this wide braided river would take a radical change of direction and even flow south of Banks Peninsula and straight into Lake Ellesmere itself.

Until about forty years ago introduced brown trout also thrived in Lake Ellesmere. Sadly today both Ellesmere and the smaller Lake Forsyth are mere shadows of what they once were. Intensive farming and artificially lowered lake levels have caused both lakes to become almost stagnant.

Birdlings Flat is about an hour’s drive from Christchurch. If you are coming from the city it is best to do a little research on the swell and weather conditions before leaving home. The best wind direction is a nor-wester which tends to flatten the sea out. A nor-wester at Birdlings Flat also means you will be casting with the assistance of a tail-wind. This is always good. When the wind is blustery you need only cast upwards and the wind takes care of the rest – well almost. This is also the best wind direction if you are heading to Birdlings Flat to go kite fishing.

The next best wind direction is a northeasterly depending on swell conditions. You have to bear in mind that the sea at Birdlings Flat can get very rough following a blow from the southerly quarter. Storms to the south of New Zealand at times cause huge swells to come roaring into the Canterbury Bight all the way from the great Southern Ocean. I have seen swells at Birdlings Flat over eight metres high. The breakers from these huge swells can run several hundred metres up the beach. In such conditions, fishing is right out of the question!

These big ocean swells can take over a week or more to subside depending on wind strength and direction. The best swell direction is north-west. Swell from any other direction is OK provided it is less that one metre and easing. If the swell is from the southerly quarter even though it might be only a metre or so and easing this often causes your line to become buried in the stones. This causes a bust off when you try to wind in your line.

To counter this effect try the following. When you first start fishing doesn’t leave your line out for more than a few minutes before retrieving your gear. If it is going to be buried bringing it in early will give you a chance to get it back before it becomes a complete loss. Secondly, try to keep your line as high above the water as possible by casting out with breakout sinker and then taking up the slackline onto your reel.

It is also worth bearing in mind that if there has been a big southerly swell the bottom will be stirred up making the sea dirty. This dirt water can take a week or more to clear.

Keep a diary as mentioned earlier and jot down the conditions described in the marine forecast as well as those you find at the beach after you arrive and start fishing. In this way, you will save a lot of wasted time and petrol driving all the way there only to find the beach unfishable. This can be frustrating and leads you to attempt to fish in risky conditions in order to make the most of the trip. I have been caught out many times. It can be a beautiful day in Christchurch with a clear sky and a light northerly blowing. When you arrive at Birdlings Flat you discover to your disgust that the wind locally is coming in off the sea and there is a heavy swell burying your gear!

To recap if heading to Birdlings Flat wait until the wind is from the northwest and the swell is either calm, from the north, or less than one metre and easing.

Interestingly your catch will likely be affected by the sea conditions as well. Moki will only be caught at the rocky end of the beach when the water is clear and conditions very calm. If the sea is a bit dirty dogfish, school sharks and red cod and skate will still be in there hunting for food. Whereas, when the sea is discoloured kahawai, mackerel and mullet will make themselves scarce. Bigger sharks like sevengillers are more likely to be around over summer when large schools or kahawai and barracouta are present chasing baitfish.

I have noticed that on my recent trips to Birdlings Flat there doesn’t seem to be as many surfcasters fishing as there were a few years ago. I’m not sure why this should be. Perhaps the high cost of petrol is having an effect.

Birdlings Flat is still the best surfcasting beach within easy reach of Christchurch city. Albeit you have to be a bit of a student of wind and swell conditions to get the best fishing. It also pays to use fresh yellow-eyed mullet for bait. I have found it out fishes anything else by miles.

If the wind and swell conditions are good and you aren’t getting any bites suspect your bait to be the problem. That old bit of frozen rubbery squid might be convenient for you as an angler but fish prefer something a bit tastier – preferably oozing fresh blood and juices! Such a bait will be easier for them to find as well.

If you are targeting rig shark, blue Moki and elephant fish you are more likely to be successful by using baits such as crab, tuatua, prawns and shrimps. Rig shark will often take these baits in preference to cut fish baits. Rig is also inclined to be hunting in water that is discoloured following a southerly storm.

The beach at Kaitorete Spit is also popular with anglers fishing with long-lines that have been taken out to sea with either kites or battery-powered torpedos. When the wind is blowing from the northwest the surf at Kaitorete Beach can be flat close to shore. When surfcasting the wind will be at your back when casting which makes for much greater casting distance.

Making your own fishing sinkers at home will save you a lot of money over time. This is especially true if you can find a cheap supply of old used lead. Even if you purchase your lead from a scrap metal dealer it will still cost far less to make your own sinkers. Molten lead is very dangerous. A few simple rules will keep you safe: Wear leather gloves and a face mask. Keep water away from molten lead or it will explode. Avoid the fumes. It is also possible to make a wide range of home made sinker moulds.

How to Tie Basic Dropper Rigs for Casting and Bottom Fishing

How to Tie Basic Dropper Rigs for surfcasting, bait-fishing from wharves and jetties, sea bottom fishing, and deepsea fishing. In this video, I am using a wooden jig made from laminated MDF board which I place on a table or desk. Overall dimensions are 760mm x 530mm. I have screwed a cup-hook into the board to act as a third hand and marked it in millimetres as shown with a felt pen. This tying method makes it easy to tie consistent dropper lengths designed to avoid tangling when cast.

Use this surfcasting rig when casting as far a possible is your main aim. On a shallow sandy beach sometimes you might have to wade out 100m and then cast another 200m to reach a distant hole or gutter. In this situation, the Yoke Rig comes into its own.

How to Catch Yabbies, or Ghost Shrimp, with a Bait Pump

Live yabbies make great bait for mullet, flounder, kahawai and other species. To catch yabbies you need a bait pump like the one shown in this video to suck them up out of the sand. It is also a fun activity for the whole family. I have had this stainless steel Alvey bait pump for many years and it's still going strong.