Landing and Releasing Big Trout in the Canals Video

Chris Anker shows how it’s done with a good fish in the Ohau A Canal near Twizel. Allan Burgess filming. Many fish were lost. However, some anglers like Chis are much better at hooking and landing these big trout. Having patience makes a big difference. Thanks to Chris Anker for sharing a few good tips in this video.

Having spent some time down at the canals I have watched many inexperienced anglers play, and soon lose, a really big fish. There can, of course, be a number of reasons why fish get off that are beyond the angler’s control. Sometimes it’s just bad luck! Perhaps the hook was barely holding in the first place, sometimes a fish will wrap you around an obstacle in the water, or a fish might be foul hooked. In this article, Landing and Releasing Big Trout, we’ll look at what you can do to increase the chances of a fish surviving the experience.

However, I have often witnessed an inexperienced angler at the canals become very nervous with anticipation and excitement at the prospect of landing an enormous drought. It might be the magic fish of a lifetime! Worry sets in that it might get off. Lake Ruataniwha Holiday Park & Motels.

Not surprisingly, the fear of losing a big monster trout causes our nervous angler to apply more pressure. Keep in mind that he was quite probably already applying too much pressure already! If you put too much strain on the line something is going to break somewhere. Your knots are usually the weakest point in the chain. A poorly tied knot can easily weaken the line by 50% or more. Frequently when a fish is lost inspection of the end of the line will reveal a couple of twists indicating the line has broken at the knot. The Surgeons Knot, that is used to tie in a dropper, is particularly vulnerable to breaking if poorly tied. You can mitigate this problem by using at least 15-pound monofilament or fluorocarbon for tying terminal rigs. The fewer knots you have the better.

I have often talked to inexperienced anglers who have lost very big fish in the canals and asked them what weight of line they had used. Many times I have heard them say they used a Surgeon’s Knot to tie droppers in 8lb or even 6lb fluorocarbon or monofilament.  Bearing in mind, as mentioned earlier, a poorly tied Surgeon’s knot will reduce your line’s breaking strain considerably, combined with the fact that there are many large trout in the canals weighing in excess of 20 pounds, using lines that light is just silly. Keep in mind also that the sooner you get a fish in and release it the more likely it is to survive.

If you intend to release your fish when fishing the Twizel Canals, trout will have a much better chance of survival if they are played and landed quickly. If the poor fish is totally exhausted it is much less likely to survive. To that end, you are better to fish heavier line. Leave the lighter lines for when the water is crystal clear.

It is a balancing act deciding on the ideal line weight. On the one hand, you want your line to be difficult for trout to see, but at the same time, your line needs to be heavy enough for you to get your fish in quickly to give it the best chance of recovering.

Tips for Successfully Landing and Releasing Big Trout in the Canals 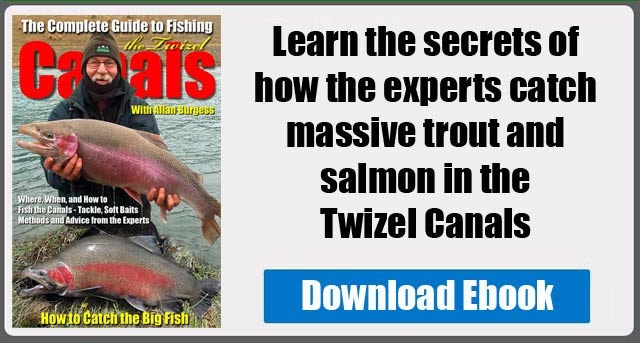 How to fish the Twizel Canals