A recent study of fish life, habitat and prey species, conducted as part of a large-scale fish salvage operation in the Tekapo Canal, by Cawthron Institute biologist Rasmus Gabrielsson discovered that there is a substantial natural fishery in the canals. The study took place over the summers of 2013/2014 and 2014/2015 as large sections of the Tekapo Canal were closed off and drained so that maintenance and repair work could be carried out.

Whereas water flowing down Ohau A from Lake Ohau to its confluence with the Pukaki Canal is usually clear; water in the Pukaki and Tekapo Canals is usually a milky blue colour. For a biologist to get the opportunity to accurately determine the species of fish, their relative numbers, and their size in the canal at a given time was a rare chance not to be missed. The data gathered has proven to be something of a surprise and a bit of a revelation!

Perhaps the biggest surprise was that there were very significant numbers of forage fish in the canal on which big trout and salmon could feed. Most anglers thought the fish in the canals were only big because of the free food handouts from the fish farms. This has proven not to be the case at all.

The scale of the job was massive. Genesis Energy, Central South Island Fish and Game, Ngai Tahu, and the Cawthron Institute worked together with Genisis staff and engineers, along with construction contractors with crane trucks and large water pumps to quickly get the job done. A total of 8km (or 30%) of the Tekapo Canal were blocked off with temporary dams, before being drained and cleared of fish. During the operation, public roads running alongside the canal were closed off.

The work was done on a section of the Tekapo Canal 15 to 20kms upstream of the salmon farm. The fish along this part of the canal would not be getting fed on pellets. It was expected that there would be fewer large fish needing to be transported up or downstream.

As the water was pumped out it came as something of a surprise to discover a large aquatic plant community thriving in the canal. Lining not only the sides but much of the bottom as well. Surprising as the canal is six metres deep. It was thought the milky blue-grey water, which is laden with glacial silt, would have prevented sufficient light from penetrating for plants to grow very well. There were many different species of aquatic plant growing on the stone canal lining. The abundant plant life provides shelter and food for an amazing number of invertebrates, large snails, and small fish (mainly bullies and juvenile salmonids). Rather than being a sterile barren place, there was instead a diverse miniature ecosystem operating beneath the surface.

Trout of all sizes being caught and transported displayed the small heads and fat rugby ball shaped bodies of fish that have access to an abundant food supply. Trout and salmon typically have this shape when they have access to unlimited food. Salmonids grow also grow quickly if food is plentiful. Conversely the opposite applies too. Lack of food is the reason why the landlocked salmon in Lake Coleridge are always thin and small. The salmon in Lake Coleridge are the same species as the Chinook salmon in the canals. They are released into Lake Coleridge by Fish & Game when fingerling sized.

The bigger fish caught from the Tekapo Canal and transported were also in top condition. Clearly, their diet included bullies and probably juveniles of their own kind. These bigger fish were active hunters!

The majority of fish captured were between 4-6lb, and brown trout were slightly more numerous than rainbows. Anglers will be very interested to know that despite their being the most readily caught fish, Chinook salmon made up just 5% of all the fish caught and removed during the salvage operation. In the later stage of the operation more than 15kms from the fish farm there was on average 350 fish per kilometre. Of this 30 % were large (between 8 and 14lbs). That is 105 large fish per kilometre.

The largest numbers of trout tended to occur where the canal made a sharp turn or zig-zag, and there we would find about 40 fish in the 4-6lb range and two to three fish over 10lb per every 100-metre stretch, along with a staggering amount of bullies. Anglers take note. A bend or zig-zag in the canal is a more likely spot to fish than in the middle of a dead straight section.

The standout information here is that the canal fishery has more trout spawning than previously thought. In the middle of summer, reasonable numbers of newly emerged fry were found, together with plenty of medium to better than average-sized fish all of which were displaying high growth rates over 20kms from the salmon farms.

Clearly, there was more to this fishery than had previously been thought. In the middle of summer, they found reasonable numbers of newly emerged rainbow and brown trout fry, plus some very large fish (20lb), along with plenty of medium to better than average sized fish all displaying high growth rates over 20km upstream of the salmon farms.

All of this indicates that there is an abundant food source available to trout, salmon and eels.

Interestingly there were also a small number of big eels found along this section of the Tekapo Canal some of which weighed 25lb. The eels were taken downstream and released below the Waitaki dam so they could eventually continue their seaward migration to spawn.

The really interesting news to come out of this is that the canal fishery is much healthier than was previously thought. Trout and native fish get the benefit of a constant supply of high quality oxygen-rich alpine water bolstered with some nutrients bonded to the glacial flour. The canal protects trout and salmon, together with native fish, and aquatic insects from floods, which regularly destroy large numbers in normal rain-fed rivers.

The lakes feeding the canals keep the water temperature constant, so unlike natural rivers, the canals seldom get too hot or too cold for fish to continue to grow at a steady rate, even in the middle of winter or summer. The combination of these factors when combined with an abundant food source – particularly if it contains a significant number of bullies and juvenile salmonids (young trout and salmon), can result in some extraordinary growth rates for trout and salmon. Growth rates that are not that far behind farmed fish feed on pellets.

It also suggests that rather than simply following the madding crowd down at the Twizel Canals, and fishing next to the fish farms, anglers might be well rewarded by trying a few different spots much further upstream!

Note from the editor Allan Burgess. Have you caught a salmon or trout from the Twizel Canals? If you have we would love to add your picture to this page. Simply email it to allan @ fishingmag.co.nz (without any spaces) together with a short caption.

If you found this article useful please subscribe to the Fishingmag Trout & Salmon Email Newsletter. Get free fishing ebooks, updates, and our latest article releases.

Twizel Canals Gallery No.1 (mouse over). 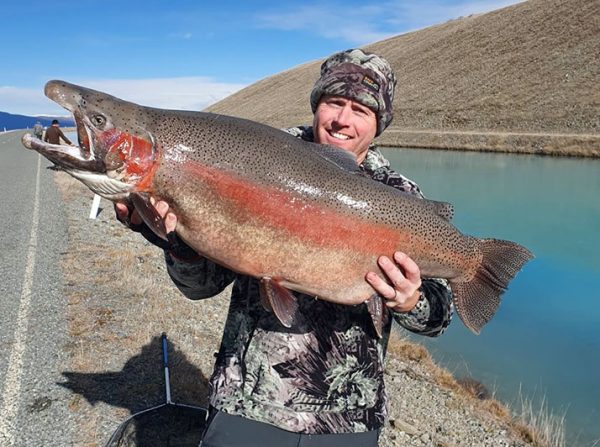 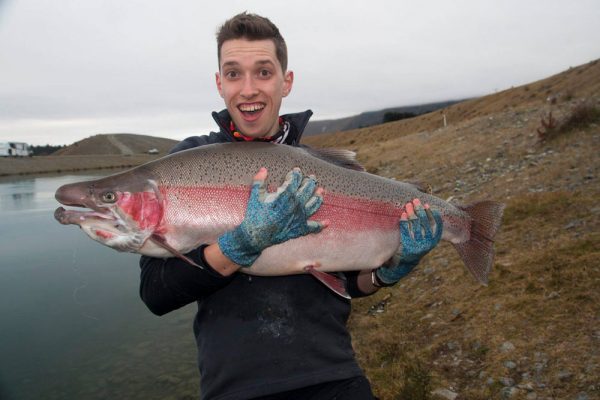 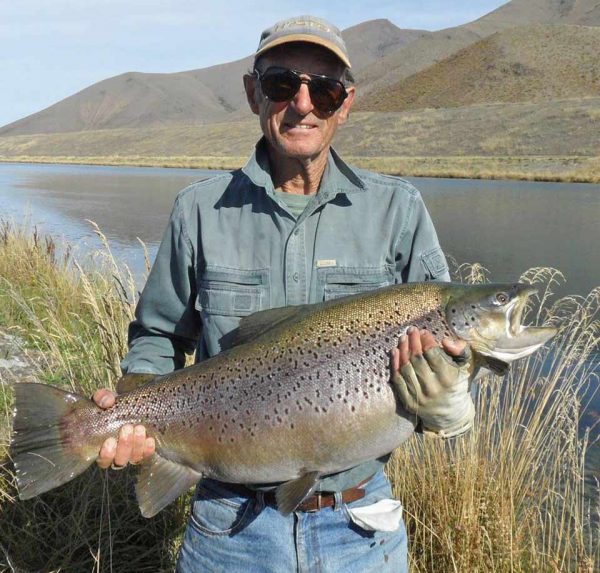 Paul Spicer caught this 28lb whopper of a brown trout at the Twizel Canals. Photography courtesy of Paul Spicer. 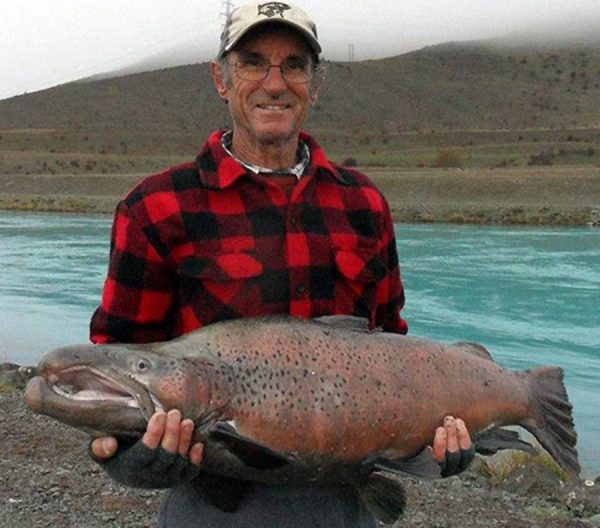 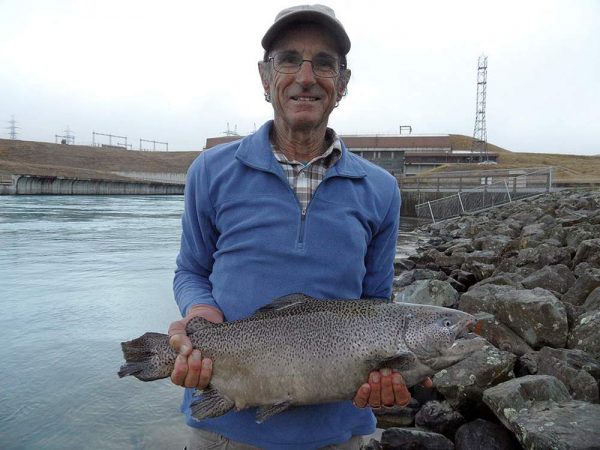 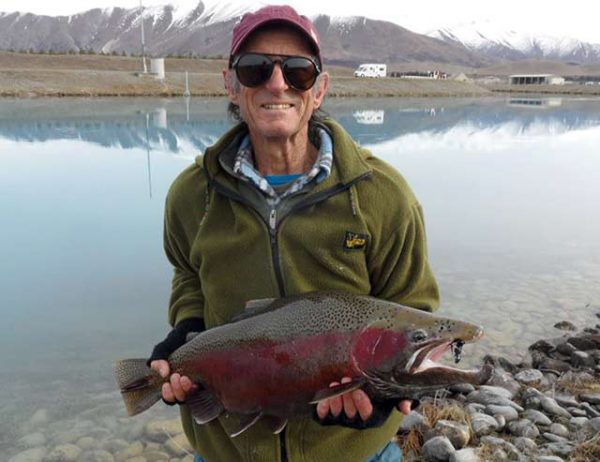 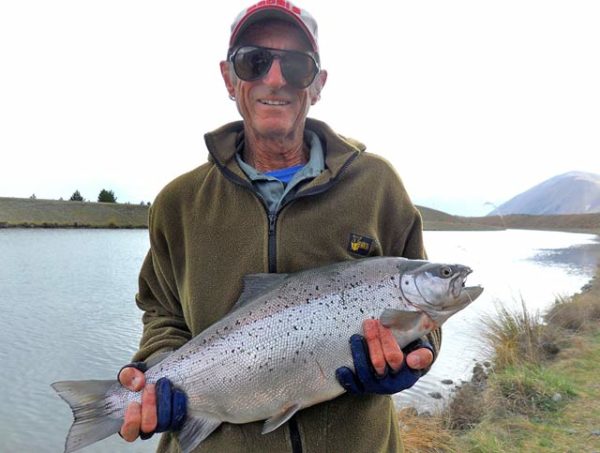 Paul Spicer with another short fat brownie, this time from the Ohau A Canal. This fish weighed 18lb. Photograph by Allan Burgess.

Charles Smith with a magnificent rainbow jack in spawning colours. 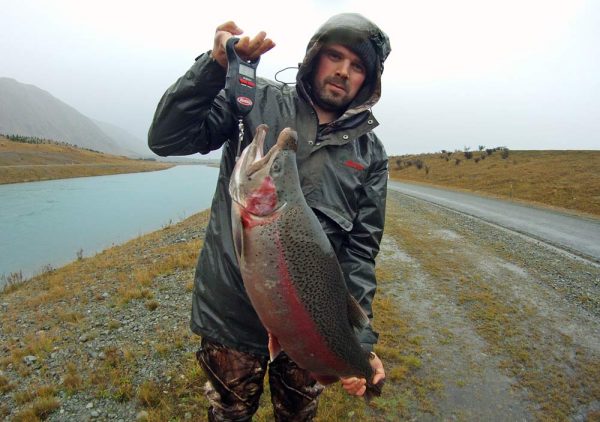 Tom Racz with a handsome rainbow jack trout weighing over 12 lbs taken in the Ohau A Canal, Mackenzie Country. 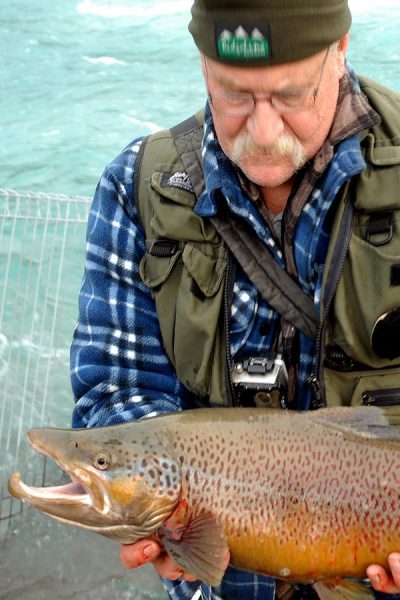 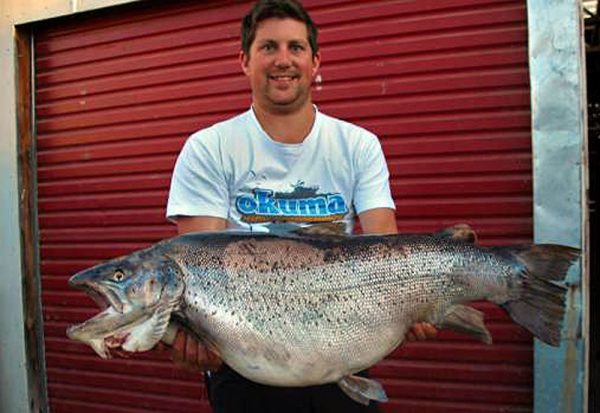 Bryce Helms 41 lb brown trout. The monster brown trout, was caught in one of the Twizel Canals by Bryce Helms in the South Island’s Mackenzie Country. It tipped the scales at 19.05kg. That was just 50 grams short of the world record. 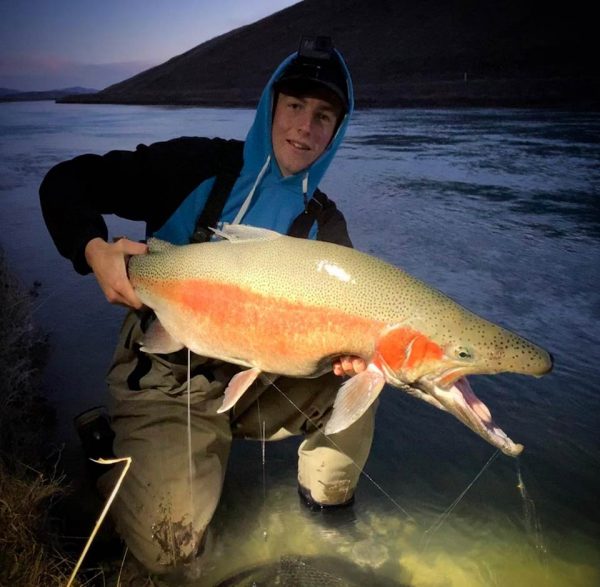 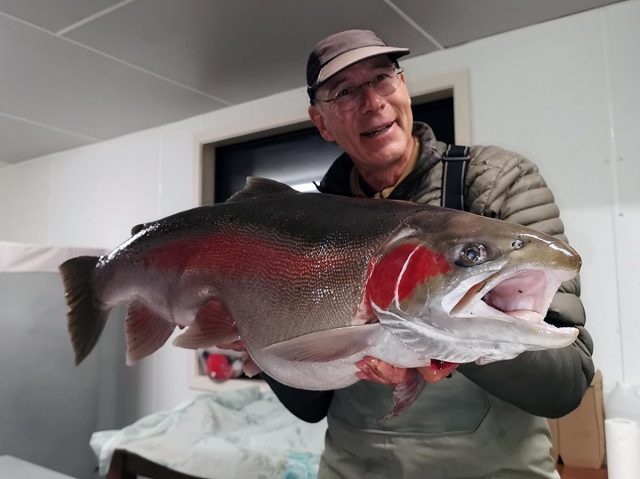 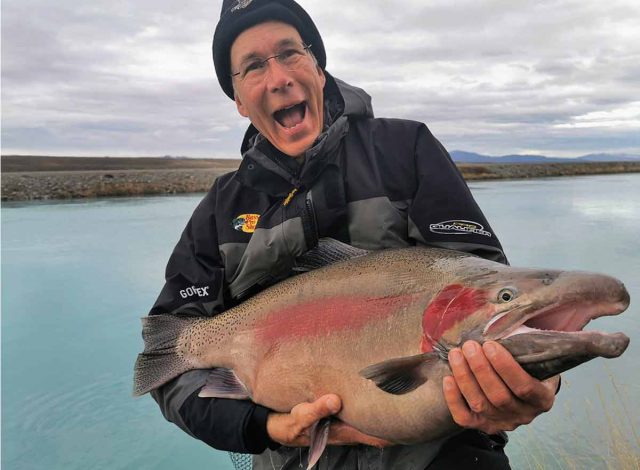 Jacob with a big Twizel Canals brown trout taken at night. Photo courtesy of JacobFishing_NZ on Instagram and Facebook. 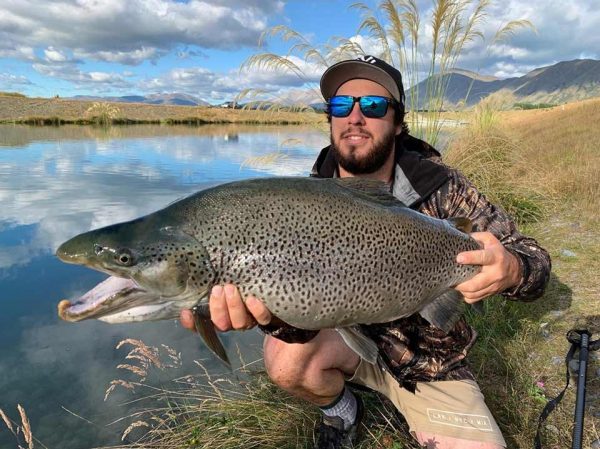 Absolute beast of a brown trout caught in the Twizel Canals during 2019. Photograph courtesy of Lance Gill and Fish The Drift NZ.
Photo gallery of very big fish from the Twizel Canals. Most were caught and released. Special thanks to all who have contributed.

Double tap on pics to enlarge.