One of my favourite fishing areas is the Mackenzie Basin and one of my favourite towns is Twizel. Sound strange! What about Queenstown or the twin lakes of Nelson or a dozen other gems you might ask? Yes, I like them too, but the Twizel area has something that reminds me of the flat dry outback of Australia where I grew up. And within sight, it has the magnificence of Mount Cook, the sweep of water of the hydro lakes, but most of all it has the rivers such as the Twizel, Grays, Tekapo, Mary Burn and Ahuriri.

There is another factor now; the canals. But the canals have been there for years, you say. True! However, in the last decade or so there has been an added element to the canals: the salmon by-catch. When the idea of establishing freshwater salmon farming in the Ohau Canal was mooted there were cries from many quarters, and rightly so. We must be vigilant if we are to preserve the wonderful wild fishery that we have. And when I first called in to have a look I was one of the sceptics.

I was given a tour of the “factory” and had the process explained to me. The checks and controls for hygiene seemed satisfactory to this layman and have proven to be so to date. The thing that impressed me most of all from a selfish position was the literal downstream benefit to wild fish. Below the farm cages and just downstream there is a new and valuable food source for wild fish trapped in the canal system. Food pellets that drift out of the farm are providing a rich source of sustenance for fish. They are growing at a great rate and are in very high condition.

On my first trip there, after watching some locals and getting a bit of advice from a farm employee, I caught three nice rainbows, one of 9 pounds with a condition factor of 79 points. One gentleman and his daughter, fishing there in August one year, caught his thirtieth fish for that year and his daughter her twenty-ninth. They live in Oamaru and come to Twizel for occasional weekends and fish nowhere else. The majority of fish that are taken are rainbows. They range in size from 2.5 lb to 17.5 lb.

There is a fish reputed to be over 20 lb which has been hooked on occasions but never landed. I have seen, with my own eyes, what could have been this monster, for when I was there last, in mid-December, I saw a fish of such proportions leaping from the water taking something from the air above the surface, probably red dragonflies that were everywhere. On that trip, I also had the joy of losing a 5 lb rainbow right on the rocks at my feet. It slipped the Tasmanian Devil just as I was about to net it.

The Tasmanian Devil lure seems to be the main piece of hardware that gets results, although I have had success with black Tobies as well. The trick seems to be to drop the lure just downstream of the last cage and let it sink close to the bottom before starting your slow retrieve.

There are more people trying the fly now than previously. On my first trip there I was told by the chap working there that he had not seen a fish taken there on a fly. This was a challenge to me. I rigged up my fly rod with a sinking line and a Hamill’s Killer on a long leader. I cast out beside the cage and let the line sink to the bottom and drift down with the slight current.

After a couple of casts, I had a hit but no hookup. This happened several more times, and then finally I hooked one. I knew it was only small straight away and brought it quickly to the net. It was one of the small sockeye salmon that had escaped from the farm. I quickly shook it off without handling it and it dashed back under the cage.

It might be of concern that some years back there was an accident where both quinnat and sockeye salmon escaped, but these fish remained near the farm for food and the vast majority have been trapped and returned to the cages.

While my main reason for going to Twizel is to fly fish the wide variety of waters in the area I always pay the salmon farm a visit. As well as having caught some of the nicest eating fish that I have ever had, I have seen fish in the 5 to 10 lb range taken, all healthy fish. So if you are down that way cash in on the salmon by-catch. 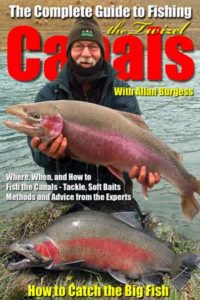