This excellent study of the freshwater fish species found in the Rakaia Lagoon will be of considerable interest to anglers who fish in this water. It offers a detailed window into the secrets of this otherwise largely unknown fish habitat. The article by Tony Eldon was originally published in Freshwater Catch by the then Ministry of Agriculture and Fisheries (MAF), in the summer of 1981.

There ought to be a more accurate word than “lagoon” for the strip of water where the Rakaia River ﬂows parallel to the coast and forms a modest ponding area behind its bar.

By either dictionary or popular definitions, the Rakaia coastal reach is not a lagoon. However, the strip is known locally as the Rakaia Lagoon and probably will continue to be known as such.

A 12-month study of the occurrence of fishes in the “lagoon” was completed at the end of July 1981. The study was part of the overall Rakaia River Study aimed at obtaining as much information as possible to predict the effects of irrigation abstraction.

The “lagoon” is a popular recreational area for those who angle for trout and salmon or who net whitebait or flounders when the mood takes them.

FRD (Fisheries Research Division) staff, however, keeping to a strict three-days-a-fortnight netting routine, found the lagoon often a bleak, inhospitable stretch of water. We were frequently unlucky with the weather and learned to grin and bear it when some local, hunched against the wind and rain, told us how lucky we were not to be confined to an office, before wandering back to his fireside.

The “lagoon” is mostly shallow – less than 1.5 m deep at high tide – but both depth and area vary greatly according to a number of factors: river level, tide, the height of the bar across the mouth, wind direction and speed. Paradoxically it is often deepest at low river levels because the river then lacks the power to cut a deep mouth.

The “lagoon” is not an estuary, for there is no influx of saltwater except for occasional surges when high seas splash over the bar.

A beach seine net launched from a dinghy was the most important sampling tool used during the study and this was backed up with a multi-mesh panel gill net and fyke nets.

During the year an estimated 78,000 fish of eighteen species were caught inside the “lagoon”. However, six of these— rainbow trout, perch, giant bully, upland bully, lamprey and kahawai – numbered fewer than five individuals for each species.

A further two species, bluegilled bully and torrent fish, were only passing through, though the latter appeared to take some weeks to do so.

Of the remaining nine species, yellow-eyed mullet and Stokell’s smelt were strictly seasonal and accounted for one thousand and 69,000 fish respectively. Present all year but with seasonal fluctuations, were brown trout, quinnat salmon (smolts), common bully, common smelt, inanga, long-finned and short-finned eels, and black flounder.

Kahawai were often present immediately outside the “lagoon” during summer and could be measured by the hectare rather than by numbers. Our capture of only two fish inside the “lagoon” was a surprise. They are large and powerful fish and so may have avoided our nets, their presence in shallow wateris usually rather obvious but we made no sightings other than the two captures.

Flounder fishermen had reported that black flounder was the only flatfish present in the “lagoon” and this was confirmed by our sampling. It was surprising that only one flounder species was found, as there are two other species (yellow belly and white flounder) present in Lake Ellesmere, a short distance up the coast.

Few brown trout were recorded. A total catch of 280 included several individuals recaptured after being tagged during the study. Also captured were some fish tagged 90 km upstream at Glenariffe, giving final proof that there is trout movement throughout the length of the river. Most trout were caught during winter and spring. Their growth rate was very fast during this period, probably as a result of feeding on whitebait and smelt.

The only rainbow trout recorded was tagged and caught again a month later. Accusations that some flounder fishermen were taking large numbers of trout in their nets could not be verified. What observations we could make did not support the charge.

Mullet nets are set in the “lagoon“ but not in the same numbers as flounder nets. Based on the results of our own gill netting we consider that mullet nets would be a greater potential hazard to trout.

More than 1200 quinnat salmon smolts were measured, many of them tagged fish from liberations made up the Rakaia River. Tagged smolts were released at Glenariffe and at South Pacific Salmon Ltd’s salmon farm below the Lake Coleridge hydro outfall. 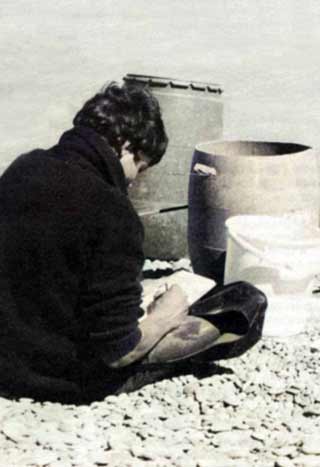 Possibly the strangest record was the capture of two perch. This followed a single specimen caught earlier by FRD staff further upriver. Just where these strays came from is a mystery but it is fairly obvious this highly piscivorous predator would not benefit the “lagoon” should it become established. The only areas in which establishment is likely are the Mathias and North Branch tributaries and the northern end of the “lagoon” itself, all very limited in extent.

By far the most spectacular part of the Rakaia Lagoon study was the invasion of the lagoon by Stokell’s smelt. They began running into the river from the sea in October, reached a peak in December, and continued until March. Only a few were caught outside this period.

Stokell’s smelt has a limited distribution (eastern and southern coasts of the South Island). Although they were known to occur in the “lagoon”, it was not expected that they would comprise 88 per cent of the catch. An interesting aspect of these slender little fish was that they occurred in large numbers in the blue-grey waters of the “lagoon” without giving any indication of their presence.