Lake Tennyson and the Clarence River by Piscator 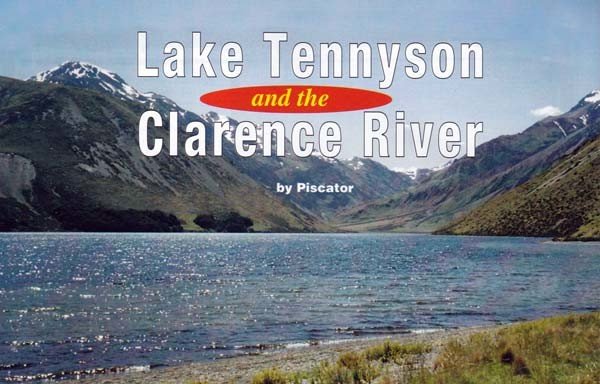 Lake Tennyson and the Clarence River

Lake Tennyson is in the headwaters of the Clarence River, Nelson-Marlborough region. Holds good numbers of medium-sized trout according to Fish & Game. The Clarence River is 230 km long and excites to the sea north of Kaikoura.

If you take the Jack’s Pass road from Hanmer Springs, beginning opposite the camping ground, you will find yourself on an unsealed road winding steeply uphill between scrubby manuka, gorse, broom and stands of exotic forest on the way to Lake Tennyson.

Upon reaching the summit and starting the gentler descent down the northern side, the scenery changes to tussock-covered slopes interspersed with patches of matagouri and briar, set against a backdrop of stark, bare mountain ranges. This is the upper Clarence River Valley, bleak, windswept and forbidding when the weather is unkind; hot, dry and often windswept through the summer months when the nor’wester blows down the valley, but a great place to be when the weather is kind and the winds light.

The Clarence River drains the Spenser Mountains and enters Lake Tennyson on the north side as a small stream, and exiting from the south side proceeds in a southeasterly direction, until shortly after the Jollies pass Junction, where it turns on a northeasterly course for many kilometres before finally flowing south and emptying into the Pacific Ocean,40 kilometres north of Kaikoura.

The Clarence, at 209 kilometres long, has the distinction of being the eighth longest river in New Zealand, yet much of its length is inaccessible to the angler, flowing through rugged gorges between the inland and Seaward Kaikoura mountains, far from any public road. However, the water which is available to the angler, from Lake Tennyson to the Molesworth Station bridge, just above the Acheron River confluence, offers ease of access from the following road and good fishing for brown and rainbow trout, although browns predominate and the only rainbows I have been lucky enough to catch have been juveniles. Bigger ones must be there for the fortunate angler.

A while ago, I spent some time fishing the Clarence River with a friend from the North Island. Along with Ben Dog, we camped at Lake Tennyson amongst the alpine flora and fished the evening rise where the river leaves the lake. The water was low, crystal clear and icy cold from the snow which feeds it at this altitude. The fish were prolific, small and eager to take both nymph and dry fly, without being too fussy about the pattern.

Michael and I had fun seeing who could catch the most and how many each of us could get, which were over a pound in weight! Sometimes having fun is more important than catching big fish, and it transported me back in time to my childhood days, when with school chums we would have stickleback or minnow catching contests. That night we slept the sleep of the truly just. Truly happy and just plain tired.

The following morning dawned fine and clear with no wind, and as the tents were wet from heavy dew, we decided to walk downstream away and fish back to our campsite, giving the sun (which had yet to climb above the mountains) time to dry out our tent flies. I suggested that we take one side of the river each and a coin was flipped to decide. After wading across I blew my whistle and battle commenced. Little was doing initially, with much of the stream in deep shadow, it’s surface smoking mistily, hiding its secret denizens in mysterious depths. As the sun rose higher, insects began to appear on the water in ever greater numbers and fish began rising everywhere.

At the height of the hatch, I identified three species of caddis and two of mayfly, which had the fish, in what I can only describe as a feeding frenzy. Michael fished an Adams, while I tried an Elk Hair Caddis and like two small boys, we whooped and yelled our way upstream each time we hooked a fish. About an hour later the hatch began to peter out and fish stopped rising. It was all over. Michael had out-fished me, but then I had caught him cheating and went to some lengths to explain that it was simply not on for him to cast across to my side of the river, particularly when he caught one of my intended victims.

Back at camp, it was great to share a large cooked breakfast together after such an exhilarating start to the day. By the time we had eaten and packed up the sun was blazing down out of a clear sky, accompanied by just a whisper of an up-stream breeze. “Perfect,” I remarked to Michael, as we helped Ben Dog into the car and headed off down the river in search of larger quarry. A few dusty miles later I stopped the car near some promising looking pools and we headed off to do more of what we like best.

It wasn’t long before our rods assumed the shape all anglers love, and we enjoyed great sport over the next couple of hours as we caught and released numerous fish, up to two pounds in weight, most of them taken on a dry fly. Nothing to rave about perhaps, but fat, hard fighting brownies which gave no quarter, lots of aerial action and fun, before all too soon our time was up and once more we climbed Jack’s Pass, homeward bound.

If you found this article useful please subscribe to the Fishingmag Trout & Salmon Email Newsletter. Get free fishing ebooks, updates, and our latest article releases.