Lake Pearson – Easy access from the nearby highway for trout fishing

Lake Pearson is one of the Waimakariri River lakes. It is situated some 125 km west of Christchurch in the Southern Alps. State Highway 73, the main road to the West Coast, runs past the western shoreline. The lake is named after Joseph Pearson, who was the first European to explore the Upper Waimakariri River area. At 195 hectares it is the largest of the Pearson, or Waimakariri, trout fishing lakes. Lake Pearson is 28 km past Lake Lyndon which is the first lake in the group on the way from Christchurch.

Lake Pearson is shaped like an hourglass. It provides easy access from the nearby highway and easy walking around most of its shoreline. There is the odd bit of scrub and prickly matagouri around the shoreline but is mostly barren tussock country broken by a few willow trees. It should be possible to find a good spot somewhere around the shoreline to avoid the worst of the howling nor ‘westerly wind which so often can be an annoyance when fly casting on Canterbury’s high country lakes.

The lake contains brown trout, rainbow trout, and mackinaw (lake trout or North American Char). The latter are difficult to catch and are quite small in size weighing less than a kilogramme. In North America, mackinaw grows to over 10 kg but unfortunately, conditions for them in Lake Pearson are not ideal. There isn’t enough food for them to grow to a large size and the lake water heats up too much in summer and is too shallow.

As with all of Canterbury’s high country mountain lakes it can get very cold in winter with many of the lakes freezing over partially or completely.

Fishing from a dinghy or kayak, that is not being mechanically propelled, is permitted on Lake Pearson. Harling or casting from a small craft of this type is very relaxing and is sure to improve your catch rate.

There is a very basic Department of Conservation Camping Ground at Lake Pearson (Moana Rua). Camping there is free of charge. The only facilities are toilets and a place to pitch a tent.

Fishing from late evening and into the night with dark coloured lures can be very effective for taking cruising brown trout which come right into the shallows after sunset. The best lures for this are Black Rabbits, Black Pete, or a Black Woolly Buggar.

For spinning tackle I suggest you try a black and gold Toby, Glimmy or small Zed Spinner, a No.10 Johnson’s Kobra or similar.

Flies: Coch-y-bondhu, Love’s Lure, along with green beetles and cicadas in summer. If lure fishing, try a Muddler Minnow, Black Pete, Olive Woolly Buggar, Hamills Killer or Mrs Simpson in the smaller sizes. The lake is also a good spot to try a lumo lure at night if you are so inclined. 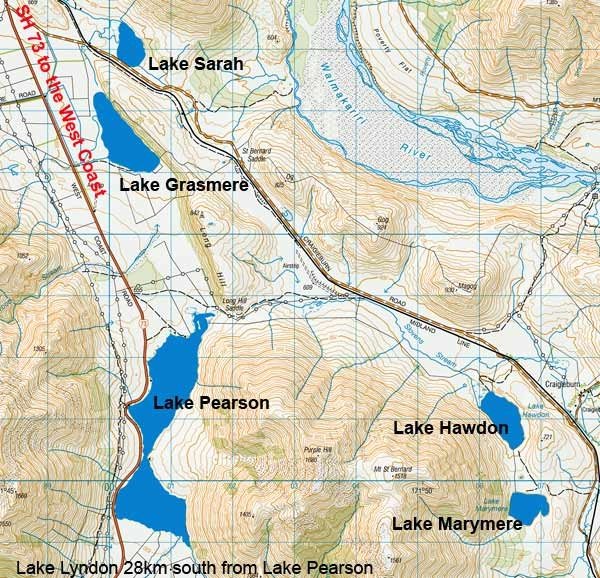 The Pearson Group of fishing lakes fill with water drained from the Waimakariri River basin. The mostly small lakes straddle State Highway 73 between Christchurch and the West Coast. The highway can be very busy during the summer tourist season. See Lake Sarah, Lake Grasmere, Lake Pearson, Lake Hawdon, Lake Marymere.
Set in the majestic Southern Alps some 125kms from the city of Christchurch the mountain country surrounding these lakes can get very cold in winter. Over summer an often blustery nor’west wind buffets these mountain lakes constantly. For the most part, there are few trees around the Pearson Lakes instead there is grassland and low tussock country. In all, there are six lakes in the group if we include Lake Lyndon 28 km south of Lake Pearson.
I should also mention that there are also several other very small lakes in the area including Lake Blackwater and Lake Rubicon. Though these little lakes hold smallish trout, you must get permission from Flock Hill Station in the case of Lake Blackwater, and from Brooksdale Station in the case of Lake Rubicon. In my opinion, these lakes are so small, and there are so many better options available, that I wouldn’t bother making the effort to fish them.
The Pearson Group Lakes open on the first Saturday in November and close on 30 April. There is a winter season extension for Lake Pearson from 1 June to 30 September. Hence if you fish the smaller lakes on Opening Day the trout will not have seen an angler’s fly for a full six months!
Lake Pearson (spin & fly fishing), Lake Sarah (fly fishing only), Lake Grasmere (spin & fly fishing), Lake Hawdon (spin & fly fishing), Lake Marymere (fly fishing only), Lake Lyndon (spin & fly fishing).

Please note that we don’t always keep these season opening and closing dates up to date. Always check your regulation booklet that comes with your sports fishing licence before heading out fishing. Here is a link to the Fish and Game 2020-2021 South Island Sports Fishing Regulations (season opening and closing dates, daily bag limits, permitted tackle and so on).
Video: A day at Lake Pearson with light gear and lots of winter dry fly action. Video by the Fishermans’ Loft. Anglers Outfitters, 359 Lincoln Rd, Addington, Christchurch 8024, New Zealand. Phone: 03 338 3131
trout fishing