For Salmon and Kahawai in the Surf

Hex Wobblers or Ticers are metal lures used for lone distance work. Designed for distance casting over breaking waves at the beach. They are almost never used to fish for salmon in the river itself. Ticers are made by cutting short lengths from a long length of a hexagonally shaped brass rod. Hence they are also known as “Hex Wobblers” and “Slices.”

Inventive anglers and manufacturers of fishing tackle have come up with numerous methods of improving the distance that these lures can be cast chiefly by making them heavier at the hook end. The aim of which is to make them fly through the air like a dart when casting so that they don’t tumble which would reduce casting distance. The best way to make weight-forward ticers is to weld on an extra piece of brass at the hook end of the lure. 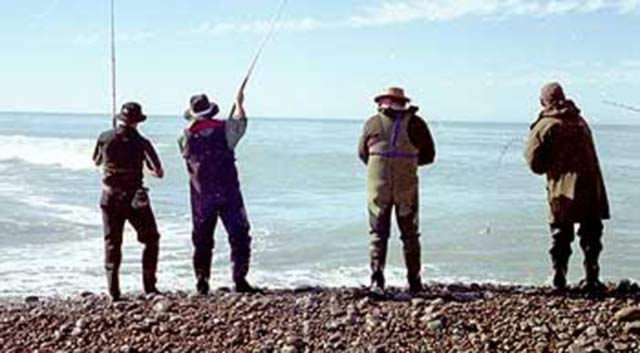 Most ticers are silvered to make them shine like a silvery baitfish. However many anglers also fish pure white powder coated models and many like to add a flash of red or yellow.

Strong sharp hooks are essential to set the hook into the hard mouth of a salmon. The lures pictured here have the popular VMC treble hooks attached.

Ticers are also the preferred lures for spinning for kahawai at river mouths throughout New Zealand. To cast very long distances salmon anglers use a special purpose designed long rod such as this Harrison or this Kilwell EnticerTW and match it with something like this top quality Abu 7500 reel.

A slice looks very similar in appearance to a  hexagonally shaped ticer. The difference is that it is cut on an angle from the ordinary brass rod so the ends are rounded. The slice was often silvered. A very good metal lure but not seen much nowadays. Kilwell Sports once sold what they called Bananas which were slice cut on a very shallow angle so that the cut surface run some three-quarters of the lure’s length.

Ticers, also called wedges or slices have long been used for trout fishing. Small ticers weighing between 6 and 14g were once common in a trout anglers tackle box and were particularly good for lakeshore fishing with light spinning gear. Popular colours were black, polished brass, and silver. Small ticers for trout fishing were also sold with cream coloured fluorescent paint that would glow for ages when charged with a torch and where good for attracting strikes from landlocked salmon and rainbow trout.

The advantage of a small ticer when trout spinning was that it could be cast a long way out into the lake and would sink faster than other lures down to the depth where trout were cruising! They are not used much for trout fishing nowadays as there are so many other lures available like soft-plastics and aqua-foils such as Tasmanian Devils and Cobras.