Provided the sea and river are clear, salmon anglers fish the surf at low tide and then move back up to fish the gut and lower braids as the tide comes in. Here an angler has hooked a salmon in the fast-flowing gut. You have to keep an eye out for sweeper waves coming over the spit. Video filmed and edited by Allan Burgess

Rakaia River salmon fishing is highly regarded. Many believe the Rakaia is the best salmon river in New Zealand. The salmon run begins in November and peaks in February and March. The Rakaia also has very good runs of sea-run brown trout in its lower reaches over spring and summer. There are also resident trout populations in the rivers middle and upper reaches.

The Rakaia River is very wide and highly braided over almost its entire 125 km length. Though access is good from either bank all the way back into the Southern Alps most angling pressure is concentrated in the 22 km between the SH 1 bridge and the river mouth.

Twenty years ago it was unknown for anglers to fish for salmon above the gorge but this is now more common. The dry and dusty shingle riverbed often spans over a kilometre in width interrupted with slow flowing braids ranging from just a few inches to fast water several metres deep.

It is susceptible to rain in the mountains. The Rakaia River can flood quite suddenly following heavy rain in the Southern Alps even though the sky above the Canterbury Plains remains clear and blue. Occasionally anglers vehicles are lost to the river when they are caught out by a sudden dramatic rise in the river flow.

Anglers must always keep a constant lookout for any rise in the river level which could see their 4wd stranded in the middle of the river. Vehicles being swept away is not uncommon following sudden heavy rain in the mountains. Watch out for sudden water discolouration that can also herald a sudden flood. It is an awesome sight to see dirty brown water flowing from bank to bank across the entire length of the 1.6 km long SH1 bridge.

There are also very good numbers of brown and rainbow trout in the Rakaia River. Down at the mouth where fishing pressure is greatest, there are sea-run brown trout, salmon, mullet and during summer schools of kahawai in the surf. 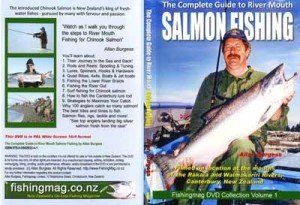 The Complete Guide to River Mouth Salmon Fishing was originally sold on DVD.  Now you can watch this one-hour easy to follow instructional video for free on Youtube. Learn all about salmon angling in Canterbury, including advice on rods and reels, lures, methods and techniques to set you on a successful path to catching this king of fishes. More…

The salmon runs are variable in both fish size and numbers from year to year. This of applies to all the salmon rivers in New Zealand’s South Island. Back in 1996, there was an enormous run of salmon into the Rakaia River. That year fish weighing in excess of 30 pounds were not uncommon. Since then returns have been patchy.

The 2014/2015 season has seen much smaller fish returning. The numbers have also been well down. Interestingly I saw an angler at the mouth of the Rakaia River during the 2015 Rakaia Salmon Fishing Contest held in late February – early March, land a salmon from the surf weighing about 5kg, then lose the second fish in the last breaker, only to land a third a short time later. He is a very good salmon surf angler.

Many experienced salmon anglers have landed only one or two salmon or none at all this 2014/2015 salmon season. This summer has been marked by low flows in the east coast rivers. If you haven’t managed a salmon this season you are not alone

The hut owners at South Rakaia hold a fishing competition which runs throughout the salmon fishing season from November through to April. Here are the fish weights. They make interesting reading. Note the heaviest fish caught weighed 7.97kg (17.5 pounds). The average weight (excluding the very small fish at the top of the list) was just 5.54kg (12.2 pounds). From memory, the last time the salmon got down to these sort of weights was the 2000 season. The most likely reason for these low fish weights is poor feeding conditions at sea.

Like all of our east coast rivers, salmon runs in the Rakaia River are variable in terms of numbers of fish returning to the river and fish size. No two salmon seasons are the same. The weather plays a big part. Some years we get a lot of rain caused by north-westerly winds in the upper Rakaia River catchment. This can result in the river flooding and be unfishable. Some years the river just clears from one flood and then we get another one. Whilst other years the problem is not enough water for farmers or fish. Watching the forecast and checking the river levels, is all part and parcel of a salmon angler’s season.

You can check up-to-date river flows here at the Environment Canterbury website. The Rakaia River is generally fishable once it drops below about 180 cumecs measured at Fighting Hill. The old-time anglers would say the river is fishable for salmon when you can see the toes of your waders while standing in water up to your knees (about 300 to 400 mm).

The Rakaia River fishes well as the river is dropping after a flood. Salmon will head up river quite quickly the day after the peak flood level. So keep an eye on the river flow on the Environment Canterbury website and hit the river as soon as it becomes fishable following a flood.

The best time to fish the Rakaia Surf is generally the bottom of the outgoing tide and the first half of the incoming. At the Rakaia River mouth, the sea is quite shallow. Ideally, you don’t want the surf to be any more than one metre or it is usually too rough and dirty for surf fishing. The gut at Rakaia tends to fish best during the top half of the incoming tide. Many anglers fish the surf on the bottom half of the tide and then move back up the gut as the tide comes in and the gut slows. Most of the salmon will be caught far out in the surf at low tide. Later in the day on the second half of the tide most of the fish caught will be taken in the gut and lower river.

A very good place for anglers to stay when fishing the Rakaia River is the Rakaia River Holiday Park which is just over the State Highway One bridge on the south side. There is a range of good basic accommodation available, as well as both powered and non-powered campervan and tent sites. Many of the competitors stay there during the annual Rakaia River Salmon Fishing Competition held in late February. A service station and shops are just a few hundred metres from the campground.

There is another smaller camping ground located at the river mouth on the south side, at South Rakaia Huts (17 km from Rakaia). It has only limited facilities – a toilet and running water. But it does have the advantage that you can camp there and ride your quad bike down the shingle spit to the mouth.

The best fishing in this upper section of the Rakaia River is later in the season between January and March. Salmon will have lost a fair bit of condition by the time they reach this far upstream and they will appear darker and pinkish in colour.

Fishing access to the narrow gorge section is limited to jet boats. Once you get about 10 km above the gorge the river opens out again with good access for the angler on foot. The Rakaia Gorge is located about 52km from Rakaia township. It is a journey of around 40 minutes by car.

The Lower Rakaia River is Popular with Anglers

The lower section of the Rakaia River from the mouth to several kilometres upstream is extremely popular with trout and salmon anglers. The best salmon fishing is between December and March. The best sea-run trout fishing is between November and February. At this time of year, there are enormous numbers of silveries (smelt) in the surf and the lower river. The big sea-run brownies literally gorge themselves to overflowing on this high protein food source.

The best fishing is just as the river is clearing after a flood. Often quite a few salmon will be caught here over a day or two before they quickly move upriver. Sometimes salmon fishing at the mouth both in the surf, gut and lower river, can be red hot with dozens of fish being caught within just a few hours.

There is good 4×4 vehicle access to rutted tracks running off Acton Road on the south side of the lower river. The best spots are Dobbins Ford, Griggs Road and Maginisses. These tracks are quite long and not suitable for cars. Don’t forget to close all the gates behind you. Even when you do reach the river from these sidetracks there is often quite a distance to travel to fishable water. Many salmon anglers own 4×4 trucks and drive these through shallow side streams on their way to deeper water fishing spots.

Best Day of Salmon Fishing on the Rakaia River

I remember being at the Rakaia River mouth on Waitangi Day 1995 (or could have been 1996) when there were several hundred salmon caught in the lower river and surf. Hookups everywhere. Hooked salmon were swimming between people’s legs. Kids had salmon on. Schoolgirls were landing salmon. Etiquette went out of the window! It was shoulder to shoulder bedlam with crossed lines all over the place. There were heaps of salmon hooked at the same time. Everyone just kept casting no matter what for fear of missing out. It was a feeding frenzy! Many of these fish weighed in the high 20s and low 30s. The heaviest I think was 34lb. Many anglers caught their limit. Sadly, I managed to not catch any that day.

Here is a very good video filmed at the mouth of the Rakaia River during the Annual Rakaia River Salmon Fishing Contest held over three days at the end of February and beginning of March 2015. Video made by and courtesy of Kevin Belcher. This video and the one below it are excellent. They really capture the excitement of salmon fishing in the mighty Rakaia River. I recommend you watch them – Allan Burgess

This video was taken during day 1 of the 2019 Rakaia River Salmon Fishing Competition. By the end of the day the river was becoming discoloured. Day’s 2 and 3 were cancelled due to a fresh (flood) in the river. Video courtesy of Kevin Belcher.

Anglers fishing for salmon during a fishing contest held in the tidal reaches of the Waimakariri River back in March 2012. Salmon are the premier sports fish in Canterbury. Catching them regularly requires experience and persistence.

One of the best days of the season on the Rangitata River. We were there with guide Kevin Frazier and so were the salmon! From Gone Fishin' with Graeme Sinclair, Series 5 episode 7 (circa 1997)