Whatipu. Located on the northern side of the entrance to Manukau Harbour. Drive through the bush-covered Waitakere Ranges to the coast. Most of the road is sealed except for the last kilometre. The drive to Whatipu Lodge takes approximately one hour and 20 minutes by car from central Auckland.

The entrance to Manukau Harbour can be a wild and dangerous place. On the 7th of February 1863, the 1706-ton steam corvette HMS Orpheus struck the Manukau bar with the loss of 189 lives. To this day it remains New Zealand’s worst-ever maritime disaster.

Should you fall into the water on an outgoing tide you can be carried far out to sea very quickly. When the sea is rough, the area is best avoided altogether.

If your fishing excursion to Whatipu is from further afield than a day trip will allow, there is a very basic campground a few hundred metres from the beach. Keep in mind that if you want to fish Ninepin Rock and Paratutae headland you need to be there two hours before high tide.

You will need to be reasonably fit to fish here as there’s a fair bit of walking involved. You have to park your car and walk the last few hundred meters carrying all your gear over loose volcanic sand. You’ll need to think carefully about what to take and what to leave behind, especially if you are planning on using berley from the rocks.

Yellowtail kingfish are caught by intrepid anglers fishing from Ninepin Rock. Methods used being either a live kahawai fished under a balloon or casting poppers and jigs.

Angling at the Ninepin is not recommended for novices. When fishing from the rocks don’t turn your back on the sea. Every so often a much larger sweeper wave can take you by surprise! Keep in mind always that you have to be back on the beach no later than two hours after low tide. Always wear a flotation device and do not fish from the rocks alone.

If you are just starting out targeting kingfish from the rocks here is a good article by Scott Hollis-Johns that will set you in the right direction: Landbased Kingfish Downunder in NZ – How to Catch a Yellowtail Kingfish off the Rocks.

Another top spot where kingfish are taken by rock-hoppers prepared to put the effort in. It pays to have a second rod set aside rigged with a surface popper, or jig, as yellowtail kingfish can suddenly appear out of nowhere. Having a rod all set up ready to cast a lure can make a big difference. Paratutae headland is cut off by the sea at high tide. The biggest problem when fishing this venue is that the bottom is rocky. The popularity of this spot means there is a lot of lost fishing line in the water to snag your hooks and sinker.

As with all rock fishing, taking the trouble to keep up a steady stream of berley will reward your effort as this is a top spot for snapper and trevally. There is plenty of small baitfish close to the rocks so finding bait shouldn’t be a problem.

The quality of the fishing varies quite a bit. At times it can be excellent. You are almost certain to catch a kahawai on a spinner anywhere around here. Kahawai will also take cut baits particularly if bait is used to sweeten your flasher rig hooks. The target species is the snapper. Trevally is also a welcome catch. The beaches can produce big school sharks with crab being the best bait for them.

Whatipu Lodge and Campground is lacking modern facilities. There are composting toilets and a couple of taps (but the water is unsafe to drink), you will have to bring your own drinking and cooking water with you. On the subject of which, over summer the black iron sand beaches can be very hot so be sure to carry enough water in your pack and in your car to keep well hydrated.

There are no hot showers or cooking facilities at this campground. Bring your own gas cooker (fires and barbeques are not permitted all year round). You must take away all your rubbish with you when you leave. No dogs are allowed as Whatipu is an ecologically sensitive area.

There are walking tracks, caves, and rock pools to investigate if you are not fishing. The area is very popular with anglers and campers, especially on holiday weekends. 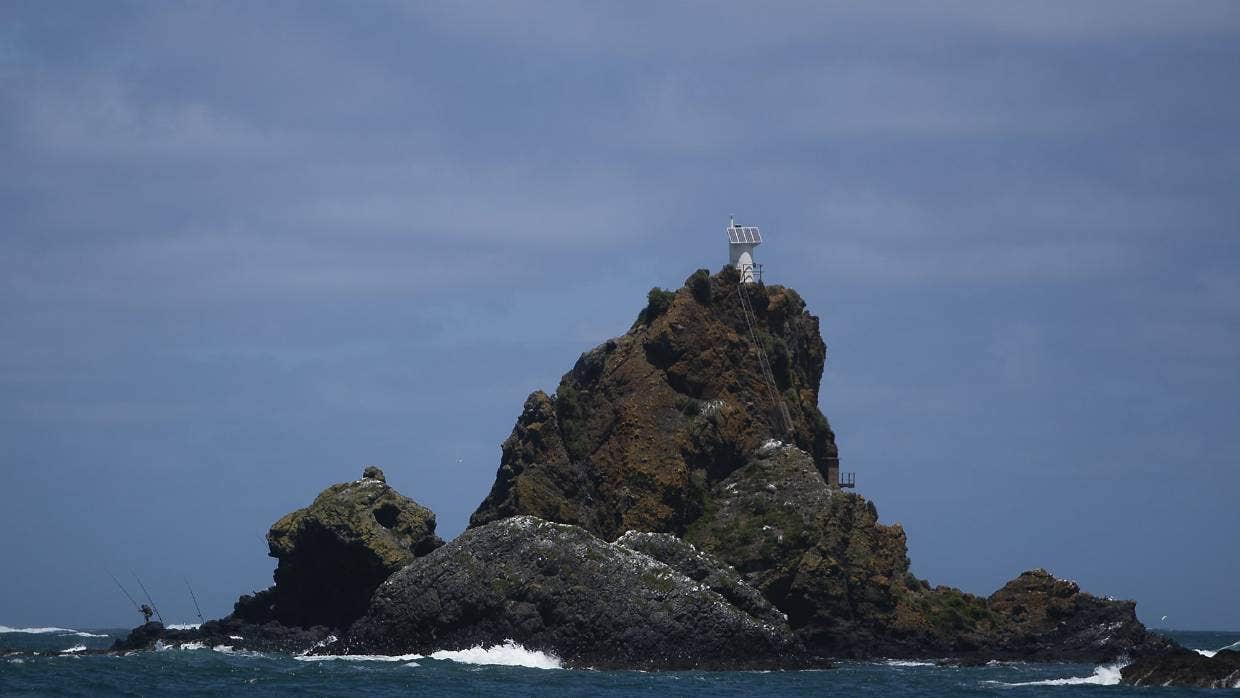 A fisherman was swept away from Te Toka-Tapu-a-Kupe/Ninepin Rock at Whatipu on Sunday.

A fisherman who was swept off rocks at a West Auckland beach was hit by a “huge wave” about 30 minutes before high tide, a witness says.

Jere Alonso, 32, said the fisherman was casting from the bottom of Ninepin Rock, at Whatipu Beach, on Sunday afternoon when the wave hit.

“He didn’t notice the huge wave and that was it, he got swept away.”

Tides for this location.