Whilst resembling a mosquito in appearance the midge is a non-biting insect of the Chironomid family commonly found in most areas of still water, particularly where there is a muddy or silty bottom. Midge pupa can also be found in some of our backwaters and slower moving reaches of our streams and rivers.

Growing in popularity in New Zealand, midge fishing is very big in both the U.K. and U.S.A. Indeed, in the U.K. the enormous hatches of midge and the subsequent “drone” of millions of adults beating wings has given rise to them being called “buzzers.” For most of us April is the last month we fish before the onset of the cold winter months. Although midge activity is at its height in the warmer months of the year, occasionally one can find evidence of a midge hatch during the colder months when perhaps other fly life is less evident.

During the warmer months most midge activity is in the early morning and late evening and on dull days. In colder months occasionally one can find a hatch during the day when it is a little warmer. 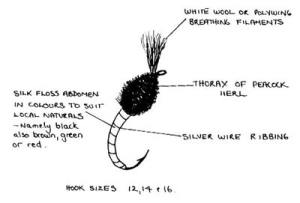 Having a relatively short life cycle Chironomids are often first to colonise new impoundments. This has been particularly evident in Lake Dunstan where after only a short period of time Dick Marquand witnessed massive rafts of pupal shucks on the water many, many metres long and wide, and so thick as to appear solid. Being a major food source in such numbers they contributed to the enormous growth rates of the trout, witnessed in the first 18 months from lake fill.

The midge is a true aquatic insect with four stages to it life cycle – egg, larva, pupa and adult. Whilst both the larva (or blood worm) and the adult are taken by trout it is the pupae that feature most prominently in a trout’s diet and as such, the most important to imitate by fly fishers.

Imitations of midge pupae are relatively simple to tie. I use a very basic pattern incorporating a black floss body (occasionally I use olive, red or brown floss to suit naturals of different areas) and rib it with silver wire – grey tying silk can also be used. For the thorax I use peacock herl and for the breathing filaments, white poly wing or a tuft of white wool. Some people insist on tail breathing filaments too – I rarely bother.

It is important not to overdress the fly and give it the correct proportions by starting the body around the bend of the hook giving it a slight curled look.

Size is also important. Generally, lightweight hooks from a 12-16 cater for most New Zealand situations. Luckily, for the most part we do not have to resort to 20s-28s as do many of our American counterparts – phew!

Midges when hatching do so in huge numbers. There are literally millions. Consequently presenting an artificial fly to midging trout can at times be a frustrating experience; with so many naturals and a lot of trout activity most of us are tempted to keep covering rises, often to no avail. Furthermore with the bulk of hatches occurring in conditions of poor light, the sighting of fish is very hard. Occasionally a fish’s direction can be seen from the rise particularly if two or three rises are witnessed in a rhythmic sequence. Then the best approach is to cast the fly to its anticipated path. If one cannot see the fish it pays to cast in the area of rises and whilst watching the leader for any take, slowly impart a series of “sink and draw” retrieves.

If fishing in slow moving rivers and streams fish the fly “dead drift,” remembering the natural pupa hang vertically in the water and that is what you are trying to imitate.

There can be no doubt that to most of us, midge fishing can be a frustrating form of fly fishing, often calling for intense observation, preparation and execution. However, with perseverance and yes, patience, the rewards can be well worth while.

Some seasons ago in April, I had the pleasure of fishing with a fellow guide from the U.S.A. here in Paddock Bay on Lake Wanaka . Larry was excited, he loved midge fishing. On arrival we quickly witnessed midge activity and midging trout. Larry set about like a true professional. Tying on a 6x fine tippet he attached a very small midge pupa by way of a “Duncan Loop” – he explained to me that it frees up the artificial allowing it to hang more naturally. He then applied sinkant to the bend of the hook and leader tippet and a little floatant to the white breathing filaments (he used a small polystyrene ball). He cast out the artificial beautifully, the little white ball of polystyrene proudly sat in the surface film for all to observe. I learnt a lot – he was patience plus. By day’s end we had caught a few fish – alas all on a very small damsel nymph – he had to change! Such are the joys of midging.