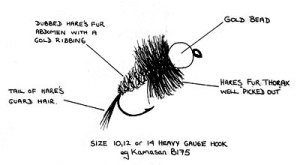 In fishing seasons past the Goldhead caught a lot of fishermen, it seemed to be on the tongues of many! Often, whilst browsing around sports shops assistants would ask “Have you tried a Goldhead?”

The first Goldheads I came across were some 20 years back when a visiting U.K. angler, John Gibson, and I went for a fish together. John’s fly boxes were a sight to behold, such immaculate dressings and so neatly displayed. Among the 700 or so John tied for his first New Zealand fishing trip I could not help notice the rather garish flies with brass heads.

“Goldheads,” John exclaimed. “They’re all the rage in the U.K. at the moment.”

Indeed, John was right, U.K. fly fishing magazines abounded with Goldhead tyings – just about every fly that requires weight has had one adorned with one at some time.

Although, personally, I find such use somewhat excessive, there can be no doubt that their popularity is a definite reflection on their fish catching abilities. Naturally, for the “purists” amongst us, they are regarded with a degree of suspicion, being classified as “attractors” and as such their use is to be somewhat scorned!

Talking of “purists” reminds me of a trip some seasons ago when two companions and I fished a nearby stream. I had tied up a number of varying sized Goldheads specifically for the trip. They were scoffed and ridiculed by one of my friends; he was using a traditional American tying of a gold-ribbed Hare’s Ear. By midday he was showing more and more interest in the Goldhead – by day’s end he was positively crawling for some!

When fishing deep pools, particularly if the water is slightly coloured, Goldheads are a good choice. Upstream fishing I tend to impart movement to the fly by occasionally raising the rod tip. The Goldhead sinks headfirst and the lifting makes it dart up through the water. With this “induced take” method, “purists” can come to terms with the Goldhead representing the gas bubble beneath the wing case of emerging caddis and mayflies.

On the Clutha River where willow growth often impedes an upstream approach, I have had good success by fishing across and downstream. Although I tend not to use Goldheads in still water I have heard that at times they can be quite effective – perhaps taken for emerging sedge or a small bully.

The fly illustrated is a Hare’s Ear Goldhead – a U.K. version tied with a well picked out thorax. Occasionally, I tie an American version which incorporates a wing case of dark turkey or pheasant tail.

There are varying styles and sizes of beads. A good choice are the ones available from “Tight-Lines” which are specifically made for easing threading on the hook – they are drilled out slightly more on one side enabling them to round the hook bend more easily and also avoiding damage to the barb.

As weight is a key factor in the use of a Goldhead fly I tie them on heavy gauge hooks with a nice round bend like the Kamasan B175. If additional weight is required tie a few turns of lead beneath the thorax.