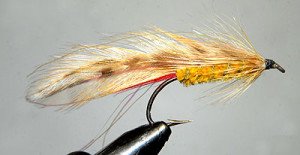 The Parsons’ Glory is one of New Zealand ‘s most popular trout flies. According to Keith Draper in his book  Trout Flies in New Zealand it was originally created by Phil Parsons of Napier back in 1924. Parsons made his lure from sheep’s wool and Plymouth Rock rooster feathers to which he applied iodine turning the fly a brownish yellow. The modern equivalent employs a body of yellow chenille and mottled honey grizzle hackle feathers.

The fly is very popular for trolling on Taupo and the Rotorua lakes, is used extensively for fly fishing at stream mouths which feed these lakes and is also popular with South Island trout anglers. It is a top sea-run brown trout fly.

A streamer fly is generally called a lure in this country. So the two terms are both interchangeable in this context.

Parsons’ Glory lures are tied in the larger size 2 for harling and stream mouth fishing down to a size 8 for upriver and stream fishing. The red whisks are not essential and the lure is sold in New Zealand both with and without them.

This is one lure that is tied and sold in many variations: yellow, red, green, olive green and fluoro lime green are all used. The original yellow bodied version is a tremendous fly for daylight fishing.

For a touch of history and to boost its attractiveness to both trout and angler the addition of Jungle Cock cheeks lift this fly to something quite special. When the Jungle Cock cheeks where added the fly was called a Parsons’ Glory Imperial.

2 Reactions on this Article