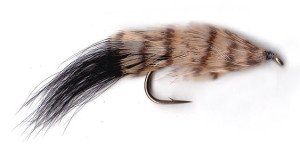 Originally the creation of Frank Lord. According to Derek Quilliam in The Complete Guide to New Zealand Trout Lures, it was first tied around 1940 and was intended to represent inanga (whitebait). When tied with the lighter buff coloured plumage of the woodcock it does look muck like a whitebait bearing in mind that the feathers are pressed tight to the hook as the lure is drawn through the water. The feathers in turn open out slightly as the lure stops. As it alternates between stop and go a fish attracting pulsating effect is created by the angler mending the line.

Lord’s Killer can also represent a bully or koura (freshwater crayfish) particularly when tied with brown instead of the lighter buff coloured feathers shown in our example. The suggestion also is that this particular lure was the first of the killer patterns.

It can take quite a few feathers to tie a proper Lord’s Killer. Start by tying in a tail of black squirrel hair.

Side feathers: Brown Woodcock (as many as ten on each side).

Ideally you want the side feathers to be quite bulky to hide the chenille. It can take quite a few pairs of Woodcock feathers to get the desired effect. In the sample shown you can see the covering is still a bit “thin” above the hook bend with the black squirrel tail visible.

Lords Killer is one of the most popular patterns for Taupo and Rotorua. 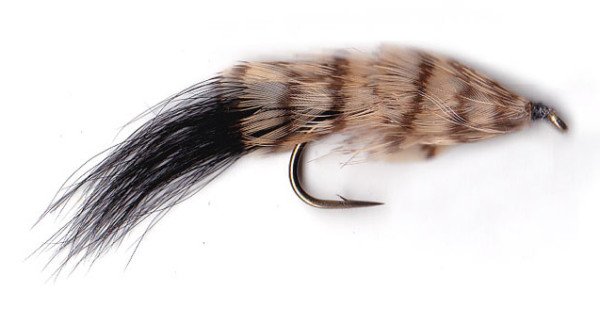