The Complete Guide to Sea-Run Trout Fishing by Allan Burgess 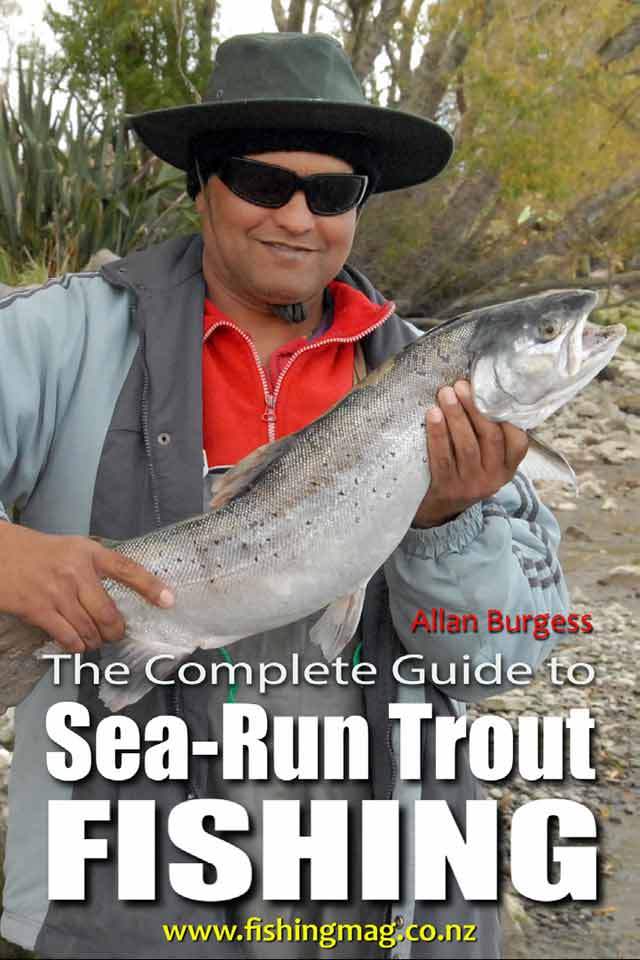 No part of this publication may be reproduced, stored in a retrieval system or transmitted in any form or by any means, electronic, mechanical, photocopy, recording or otherwise without prior written permission of the publisher.

1. Where Do Sea-Run Trout Come From

As I’ve gathered information for this book about sea-run trout fishing many anglers have willingly shared their most successful, and time tested fishing methods and techniques. After more than thirty years of fishing, I am still learning new things all the time. I am very grateful for their assistance and enthusiasm to help out with my projects in any way they could. Willingness to pass on information to help a fellow angler is a commendable trait many of us share. So often with fishing, a few small changes to the way you are going about it can improve your success rate considerably.

Fishingmag editor Allan Burgess. This online ebook is spread over 8 large web pages. The text is brought to life with exclusive “Members-Only” high-resolution videos. More videos are being added. Note also that members are free to download a .pdf version of this ebook – the download link is at the bottom of the last chapter.

Most of us will have heard the old saying about a small number of anglers catching most of the fish. This is especially true when it comes to fishing for sea-run brown trout. Knowing the best way to go about it makes a huge difference.

Over the countless hours I have spent fishing over the years I have noticed that a small number of fishermen definitely do catch a disproportionately large number of sea-run trout. It doesn’t matter if they are fishing the fast water of the lower Rakaia River, or the slower meandering, at times almost lake-like sections of the Waimakariri River, certain anglers regularly hook way more fish.

Sea-run trout fishing in the Waimakariri River is where I started out many years ago. I had a great teacher named Athol Marley. We would fish the Waimakariri River along a 2km stretch between the bridges and the Banana Hole, almost every evening between October and Christmas. In those days almost everyone fished two feathered lures with a fibreglass lure rod and used a small lead weight to take the hooks down near the bottom.

I fished a 9 weight Fenwick Ferralite that I bought cheap somewhere. We also used the same rig on spinning gear at times when fishing wider stretches.

Some nights, depending on the river level, we would wade across a deep run to gain access to a long island out in the middle of the river. I remember being more than a little frightened as we locked arms to wade across the fast-flowing greeny-brown torrent. At its deepest, it would be only an inch or two from the top of my waders! Provided the tide was falling you would at least have the comfort of knowing the return journey would be less perilous. Once across we would fish a good run in waist-deep water. In no time at all, we would be into fish. With the water carrying a bit of colour the sea-runs would often take the lure right at the rod tip.

For some reason I would snag almost every submerged stick in the river; often busting-off lures left, right, and centre! While Anthol hardly ever seemed to lose his as he hooked fish after fish. Soon after that, I got into tying my own yellow-rabbit lures – more out of economic necessity than anything else.

In those days that section of the river was called Colombo Street. I think the name was a reference to the number of anglers who liked to fish that popular stretch of water! That brings me to an interesting aside.

Sea-run trout fishing can be a strangely communal activity. As a group of anglers fish together night after night in close proximity they soon get to know one another. This has its benefits. As each angler arrives and joins the line in the river he learns how many fish have been caught by the earlier arrivals. If he has missed a few days he can quickly be updated with what has been happening in his absence. As the years pass friendships are created.

Interestingly even though there might be twenty people standing in a line in the river you will soon discover that certain anglers nearly always catch most of the fish. They are perhaps winding their lures at the speed most attractive to the trout, or using just the right amount of weight to get their lures down, or letting their gear sink sufficiently first! For the novice, this is a wonderful place to be. By joining in and simply copying the more successful anglers you will learn a great deal in a short time.

Welcome to The Complete Guide to Sea-Run Trout Fishing. In this ebook, we’ll learn about sea-run brown trout, where they come from, when and where to fish for them, and we’ll also take a closer look at the tackle and fishing methods used to target these big silver coloured fish as they return to our rivers from the sea where they have been feeding.

Although this book refers mostly to fishing for sea-run brown trout in my home province of Canterbury, the techniques and methods employed can be used to catch sea-run trout throughout New Zealand. Sea-run brown trout by their very nature of going to sea, and later returning to our coastal rivers, have been able to colonize almost every coastal river, stream, estuary and lagoon throughout New Zealand.

Sea-run browns are particularly plentiful around the coast of the South Island. They can be surprisingly numerous in Canterbury during spring and early summer. These fish represent a significant angling resource in this part of the country where they attract considerable angler attention.

In Canterbury, as in many other areas, sea-run brown trout fishing is an important time on the angler’s calendar. Sea-run trout fishing fits in somewhere between the whitebait season and Christmas. It is the entrée before the start of the salmon season in late November and early December.

In Canterbury, sea-run trout fishing overlaps the whitebait season which starts on the 15th of August and continues on until the end of November. Sea-run browns begin entering the rivers following whitebait and smelt in the spring. For many Canterbury anglers, sea-run brown trout fishing in the lower coastal rivers means the first time rods and reels will have come out of the garage since the previous summer.
The trout fishing season starts with the new annual fishing license becoming available on the 1st of October. In decades past few anglers would fish for sea-run brown trout before 1 October. Nowadays fishing is permitted in the lower rivers all year and many anglers now start fishing for them in September. Though generally, these early fresh run fish will be smaller and thinner than those caught later in the season around Christmas time.

Please note that the regulations regarding trout fishing in Canterbury are being changed more often nowadays. As always anglers must check the regulations with Fish & Game before going fishing on any water.

For example, For the 2018/2019 season, it is now not permitted to take trout from the Rakaia River, downstream of Coleridge Tailrace confluence (Eastern Zone) to State Highway One during the winter season 1 May – 30 September.

Rakaia River, downstream of State Highway One, 1 October – 30 April FSB. The limit is two trout and two salmon. North Canterbury Fish & Game Fishing Regulations from 1 October 2018/2019 in .pdf format. Not that the new fishing regulations come in on 1 October 2019. When they are released they may be different. Check the booklet that comes with the latest fishing licence. If in doubt telephone Fish & Game before you go fishing (0800 347 426).

It is not unusual for sea-run browns to be caught in the lower Rakaia River in December, January and February that are as big, if not bigger, than some of the salmon being caught! Sea-run brown trout weighing over ten pounds are not unusual after Christmas. Big sea-run browns are still entering
the rivers as late as March.

Around the start of the new fishing season on 1 October many of the browns caught will be darker coloured resident fish. A few sea-run brown trout will be appearing but generally, these fish will be smaller at 3 pounds or less. As the season progresses throughout October and into November more sea-run trout will appear, and many of the later arrivals will be in better condition.

It is worth noting that sea-run trout fishing varies from year to year. Some years the fish seem to arrive later. The weather also plays a significant part. Some years over the spring period we get a lot of Norwest winds in Canterbury meaning heavy rain in the Southern Alps. This causes our big rivers to run high and discoloured; sometimes for long periods making them frustratingly unfishable. However sea-run trout fishing is possible in water that seems quite dirty. The rivers generally clear sufficiently for sea-run brown trout fishing within a few days once the rain stops falling in the mountains.

You will notice in the photographs that some of the trout caught are being released to fight another day; some have been accidentally foul hooked, and so must be released unharmed. With the limit now having been reduced to two fish per day in the North Canterbury Fish and game region, many anglers choose to release fish so they can continue fishing. There is nothing wrong with keeping a fish or two for dinner.

If you are new to sea-run brown trout fishing I hope this book will set you on the right path to catching fish like one of the old hands. Past fishing experience counts a lot. You don’t need heaps of expensive gear for sea-run trout fishing. Purchase a fishing license and get out there and give it a go!

I have been sea-run trout fishing now for at least 30 years. Over that time the gear used by anglers to catch these fish has changed quite a lot. Back in the 1980s almost everyone fished for sea-run brown trout with a pair of feathered lures like the Yellow Rabbit and Hopes Silvery. These were fished with the aid of a D lead a meter or so up the line cast with a fibreglass lure rod.

When we needed more casting distance we used our salmon spinning rods with the same D lead and feathered lures. Nowadays that sort of uniformity of tackle has largely disappeared. If you go down to the rivers during the season now you will see anglers fishing for sea-run trout with all manner of bibbed minnows, spinners, and more recently, soft plastics fished on braid. Older guys like me who have witnessed these changes often “scratch our heads” in amazement! I have also been giving new tackle and ideas a try. Braided fishing lines have been a huge improvement for spin anglers.

There are more people fishing for sea-run trout nowadays than was the case 30 years ago. However, in my opinion, the numbers of sea-run trout available for anglers to catch are as good as they have ever been. It amazes me just how many good-sized sea-run brown trout are caught between the bridges on the Waimakariri River some evenings. If you are just starting out that location is a great place to learn the ropes by watching the experts!

NEXT Chapter 1. Where Do Sea-Run Trout Come From