In a not so good season you have to work hard for every fish! 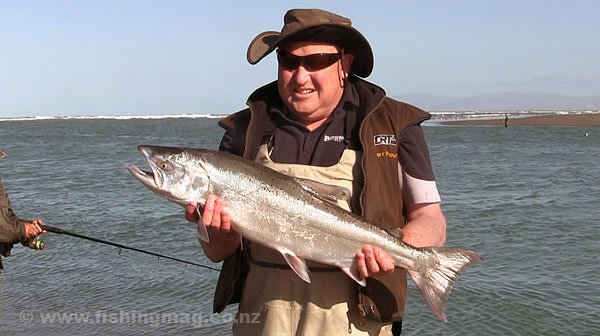 This salmon was caught at the mouth of Canterbury’s Waimakariri River on 7th March 2015. Although the fish are smaller this season they are actually harder to catch because there are fewer of them.
There are good seasons; and not so good seasons
The main run of salmon in the Waimakariri River is in mid to late March. However this 2014/2015 season has been a poor one. It is a poor season in two respects; the numbers of salmon returning are very low, and secondly the salmon are small and skinny. When the salmon are small and skinny the numbers are always well down too.

Many anglers are unaware that the difference between the numbers of salmon returning in a good season to that of a poor season is quite large. In a good season there may be as many as twenty times as many fish entering the rivers for anglers to catch.

The salmon are small because the numbers of sprats and krill, the species which salmon mainly feed on at sea, have been noticeably down this summer. This has also effected yellow-eyed penguins which have been starving.

Early season fish weights are a good pointer to the prospects for the season ahead. If you look at the early season salmon weights for fish caught by Rakaia Hut Owners, in their competition.

In other words it is a poor season this time around. The salmon are small and there are far fewer of them. Many anglers I know who usually catch quite a few haven’t even caught one. It comes down to conditions at sea. Salmonids grow big quickly if they have a good supply of food and the water temperature is to their liking. You can see a good example of this by the huge size of the trout and salmon caught down at the Twizel Canals where they get plenty of free food. Conversely they grow slowly and are a lot smaller if they can’t find much to eat. A good example of this can be found in Lake Coleridge where the landlocked salmon are small and skinny because there isn’t much for them to eat.

Next summer, or perhaps the one after that, the salmon will be bigger and there will be a lot more of them for anglers to catch. Still some anglers will catch fish – good season or not.