Spent Saturday fishing Kaikoura, arrived mid morning to fine conditions, but with the Sun still behind the hills the temperature was a bit chilly.  Could not be bothered going out in the Kayak, so went spearfishing instead .

First tried at the Peninsula, got a few Paua and large Kina but did not even see a decent size Butterfish. Visibility ranged from 1.5-4m.

Tried a new spot near the Peninsula and discovered a lot of crayfish, the most I have seen. Many of them were tiny to borderline and with the females being in berry I did not really want to disturb and measure a lot of them. Did grab a big male (maybe personal best) which was hiding in a cave inside a cave.  Visibility ranged from 2-3m.

Then to the south coast, and broke my mask strap… Back to town and decided replacements straps were to expensive so got a new Mask instead. Dived Limestone Bay, visibility was decent in more sheltered spots, maybe 4-5m. Saw a few more fish but nothing worth shooting.

Just before 4:30, it was a race to the Whalewatch for a evening Surfcast. Rods out, mussel for bait, hoping to catch a Moki. The fishing was slow, with no highly desirable species being landed. Duckman and Ginga got a few undesirable species (Red cod, skate, doggies) using fish or squid for bait. On the positive side the weather was good all day, heard it got over 20 degrees (did not know that in the water). There was little wind which got a bit cold after dark. 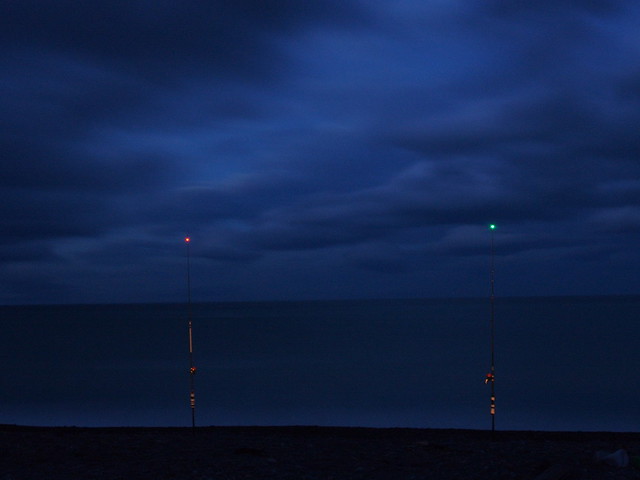 Surf Rods at Night by Thomas J. Walsh, on Flickr