Every so often when it comes to fishing tackle, a really good idea comes along. Mustad Fastach Clips are one of those really good ideas. Once you try these you will be hooked on them. I have given up tying my soft-baits on when fishing the Twizel canals. I now use Mustad Fastach Clips. These are brilliant. I can swap lures in a few seconds without the need for pliers, a knife or scissors. 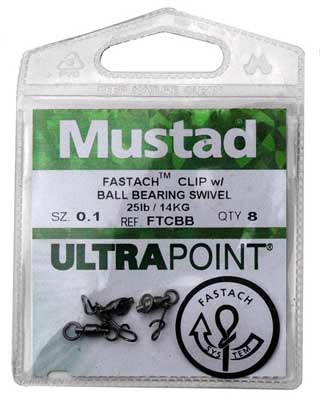 If you are one of those anglers who like to chop and change lures after every few casts then these clips are perfect. Cutting the lures off and tying knots in your monofilament or fluorocarbon leader not only takes longer than using Fastach clips it also shortens your leader each time. This isn’t always a problem however if you only had two-rod lengths of leader to your braid mainline at the beginning of the day, come the end of the day your leader can get very short!

I would still cut the Fastach clip off and retie it with a uni knot after catching a big fish just to be on the save side. The knot is always a weak point where your line could break under the prolonged strain of that next surprisingly big fish.

The clips also allow your lure a bit of movement to attract fish. They are super strong yet very small so don’t make small lures appear a lot larger.

“I always use a Mustad Fastach Clip in size 0.1 to attach the leader to the rig and for fishing soft-baits in the canals. These have a very small high-quality ball bearing swivel and the secure clip makes it easy to change rigs or soft-baits quickly. The Mustad Fastach Clips in size 0.1 Ref FTCBB come 8 to a packet. Personally, I would not fish without them. When used with soft-baits they allow the lure to move freely with more natural swimming action.” – Allan Burgess