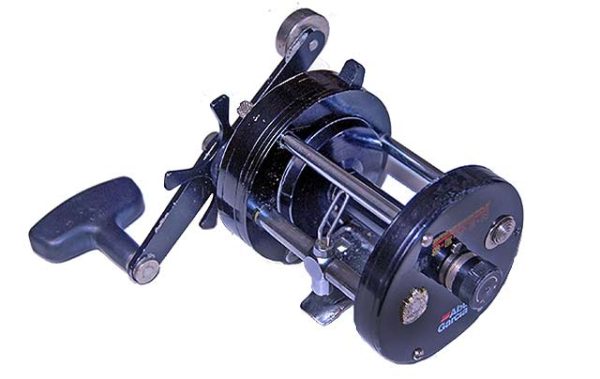 The Abu Garcia Ambassadeur Seven Sprint was a salmon/surf reel that came out in New Zealand during the 1980s. The gear ratio is 6.3:1. which was very high, especially for the time. A disadvantage with older very high-speed bait-casters was they were made with a pinion gear that had fewer teeth than a slower speed reel. A pinion gear with fewer teeth is generally regarded as a weak point more readily prone to wear. With this old Abu Sprint reels the gears would soon run rough compounded by the frame not being strong enough to cope with the forces exerted on it during casting and retrieving. Hence the spool would run out-of-true and wobble slightly. They were eventually phased out and replaced by the 7000 and 7500 series Abu reels.

When casting and retrieving it the reel feels very similar to the Abu 7000. The one thing I noticed, however, is that the 6.3:1 retrieve is way faster than the 7000. If you wind flat-out the ticer comes in very quickly! This makes it ideal for kahawai fishing at river mouths. As mentioned above it feels a bit lumpy in the gears, though.

The Abu Garcia Ambassadeur Seven Sprint had brass bushings which many anglers replaced with ball bearings to increase casting distance. One good thing is that the Abu Seven uses the same bearings, pawl, and worm gear, together with many, but not all, other parts as the 7000 series reels. So many parts are interchangeable on the left-hand side. The main gear and pinion, of course, are not.

“They are good reels except the frame is not as sturdy as the older 7000’s or 7500’s and if you are capable of really laying into a cast you will eventually bend the frame (shove it sideways relative to the reel foot). It can be bent back into shape when you dismantle the reel.

Mark Preston who is a very good surfcaster (used to be at the Compete Angler, then Hamills, now Hunting and Fishing?) used to use one of these in the surf for salmon back in the day (90’s) teamed up with a tricast and at the time guy’s using SL20SH’s couldn’t heave a ticer further than he could, myself included. He had the bending frame issue and so did I on mine. Now there is a raft of reels that would outperform a 7 sprint. My one is a simply a 7 not a sprint, Identical except it has the standard 4:1 retrieve ratio. Some people upgraded these to the faster reel by swapping the pinion and main gear, I just cranked faster!“

“I really appreciate your comments about the Abu Seven. I’ve seen Mark Preston distance casting at the Rakaia River mouth and I agree with you that he is one of the best. I didn’t realize he had used an Abu Seven but I did know he fished a Tricast rod.

What you say about the frame on the Seven twisting makes sense. The effect of that occurring would cause the spool to become off-balanced and make it run rough. It may even cause the edges of the spool to scrape the frame.

“I spoke to Paul Thomas last week about the reel. He said that the left-hand side is good but parts for the right-hand side, i.e. pinion and main gear are hard to find, as are the side plates. He also said that the spool control knobs can bind to the alloy bushing housings (see picture) so they become locked together meaning the spool control knobs can’t be used. Once stuck together turning the knob turns the housing as well making it almost impossible to remove or replace the brass bushings. Paul says this is not easy to fix. The problem is caused by lack of maintenance. Some anglers may have a reel for many years without ever adjusting the spool control knobs until eventually, they seize up. It is a good idea to periodically remove the knobs and coat the thread with a little grease to prevent them from binding solid. This applies to all models of Abu bait-casters.”

The Abu Ambassadeur Seven Sprint was a good salmon reel back in the 1980s used by some of Canterbury’s top anglers. It was made in Sweden. Unfortunately, it is impossible to get parts to restore one of these reels to good running order consequently those that are found will probably have lumpy gears and therefore best avoided if you are wanting it to use for fishing as opposed to an ornament of sentimental value only. It may be possible to source parts for an Abu Seven Sprint from overseas but I felt that this would be uneconomic given that I wanted to use the reel for fishing and might quite possibly end up with the same problems again from doing so. Whereas a rough Abu Garcia Ambassadeur 6500, 7000 or 7500 can readily be repaired to as new condition with parts that are inexpensive and widely available in New Zealand.