The trevally is a moderately deep-bodied pelagic fish that normally averages between 30 and 60 cm in length, although occasional specimens reach 80 cm. Some large individuals in the far north of New Zealand can grow to almost 1m and weigh as much as 210kg. Their appearance changes over their lifetime. Fish up to 30cm often have a yellow stripe running from mid-body to the tail.

Notably larger fish over 40 cm become deeper bodied, and often develop a hump on the head caused by an enlargement of the bony skull crest similar to that of “old man snapper.” These older fish also become a darker blue-green on the upper body.

The most notable features of this fish are the deeply forked tail, black spot on the gill plate, and a curved crescent-shaped lateral line. There are hard shutes on either side of the narrow caudal peduncle (where the tail joins the body) to strengthen it. Their narrow tail makes them easier to hold on to.

Overall, the body colour is silver. Light blue-green on the back, and silvery-white underneath. The body of the trevally also has a yellowish sheen. The fins are a light yellow-green colour.

Change of body shape and colouration

It should be noted that trevally change in appearance throughout their lives. Juveniles have verticle bands of green and gold. These verticle bands are also sometimes present in recently caught full-size adults. Large older fish often developed a pronounced hump on the head in a similar way to big old snapper. The hump is caused by an enlargement of the bony skull crest.

There are only one species of trevally found in New Zealand.  It is also found in southern Australia where it is known as silver trevally. 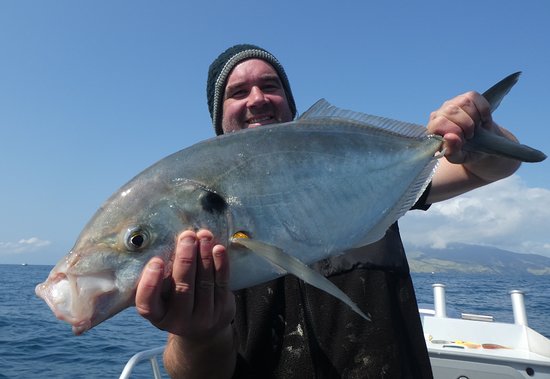 “Nice trevally for Scotty. They make great sashimi!” This photo of Northside Adventures is courtesy of TripAdvisor. Northside Adventures, North Auckland based fishing charter. Our main port of operation is the picturesque Sandspit Harbour. Less than an hour’s drive north of the Auckland Harbour Bridge, it gives us access to some of the best fishing locations in the Hauraki Gulf. Note trevally has soft mouths meaning your hook can be ripped free if excessive pressure is applied. For this reason, it is also best practice to use a landing net rather than lifting the fish aboard by the line. 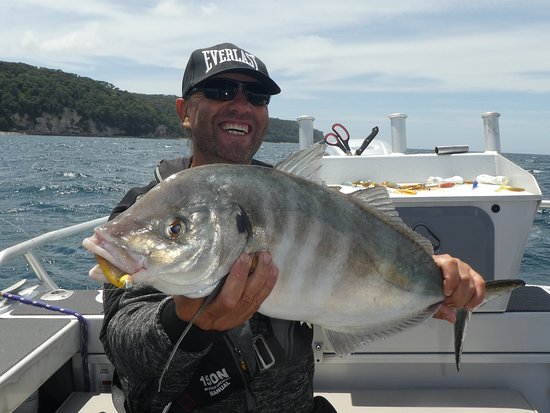 This photo of Northside Adventures is courtesy of TripAdvisor. Note how trevally change body shape as they age. This large specimen has verticle grey bands that are also seen in young trevally under 10 cm. Not all older fish have these verticle bands, however, and some big trevally can appear quite green on their upper backs.

Studies of the earbones – otoliths, have shown that this species is, according to the Collins Guide to the Sea Fishes of New Zealand by Tony Ayling and Geoffrey J. Cox, slow-growing and long-lived. At a year old they are less than 10 cm long,  at three years 30cm, and at 10 years have reached a length of about 40 cm. A 30-year-old fish measures about 45 cm in length.

Trevally is more common around the North Island, where they are most abundant in the far north. Their range extends south to the upper South Island, particularly in Cook Strait and Queen Charlotte Sound, and the Upper West Coast north of Westport. Enormous schools of trevally several km in length have been recorded off the Auckland Peninsula. In the Auckland market, fresh trevally can be purchased 12 months of the year, but are more abundant between January and March.

David H. Graham, in a Treasury of New Zealand Fishes, reports that there had only been an authentic record of two trevally specimens being caught in Otago waters up to 1935. Both of those fish were found to be feeding on shrimp known as Brachycarpus audouini.

Perhaps with Global Warming, we may see more of this species being caught further down the South Island.

In northern New Zealand small juveniles, less than 10 cm in length, are found schooling with warmer water fish like blue maomao and sweep.

Plenty of juvenile trevallies, which we throw back, are caught in the Marlborough Sounds on small baits and sabiki rigs when berleying for baitfish and are often taken in the company of juvenile yellow-eyed mullet, piper, juvenile kahawai, mackerel and small snapper.

They will readily take a small cube of squid or mussel presented on a size 10 sprat hook. When jigging with 1/0 sabikis, trevally is often caught over the same ground as tarakihi. They are great fighters on rod and line.

Surfcasters have been known to catch large trevally while beach fishing from Wellington north. Shellfish, tuatua and mussel, in particular, tied on with bait elastic is the best bait. They will take a variety of baits including mullet strips, crab, and others, but most experienced anglers report that the best bait is tuatua.

This species is often caught by anglers targeting snapper on surf beaches in the far north of New Zealand. However, trevally comes and goes. Some days they are there and biting, and other days no trevally are caught.

Use hooks at the smaller end of the range from 1/0 to 5/0. I’d say 3/0 is the ideal size fished either as a running rig or a paternoster or flasher.

Keep in mind the whereabouts in New Zealand you are fishing. Surfcasters in Canterbury, Otago and Southland are very unlikely to catch trevally. There are however other good fish you can target in the south like blue moki.

This video is about Chasing Far North Trevally

This species is certainly one of my favourites to catch here in NZ. On light tackle, they provide some incredible fun! Cheers for watching.

Jigging is a popular and effective way of catching trevally. Smaller lures weighing 40g or less are generally more effective on surface schools that are feeding on small prey fish, krill and so on, which they take by sucking them in rather than slashing at them. The 18g silver/blue jigs used in this kahawai fishing video, along with the light-weight rod and reel setup is a great choice when boat fishing for surface-feeding trevally or jigging in 30-40 metres or so. Trevally will put up a great fight on this sort of gear and you will get a lot more hook-ups!

At times trevally are quite selective feeders and can be difficult to catch. Keeping your jigs, spinners, flashers, or soft baits on the small side is more likely to be successful. When boat fishing they will readily swim up through your berley trail making lures more likely to be effective.

This species has a high oil content making them a popular choice for Sashimi and Sushi. By most accounts, they are not so good fried. The pinkish flesh lightens on cooking. Excellent for smoking and baking. Most cooks remove the darker strips of muscle, similar to that of kahawai, before cooking.

This fish breaks down quickly after being caught. Be sure to gut and gill them as soon as possible after capture and get them on ice straight away.

For many years trevally has been sold frozen in supermarkets, garages and tackle stores as bait. The high oil content of the flesh makes it very good for this purpose.