This member of the hound shark family has a slender body with a sharply pointed snout. The teeth are similar in the upper and lower jaws, being small and cockscomb shaped. There are no spines on either dorsal ﬁn. The first dorsal fin is much larger than the second dorsal ﬁn. The upper lobe of the tail is deeply notched with an enlarged tip. The colouration on the upper surface of the body is grey while the lower surface is white.

The school shark is found in waters ranging from 10deg. C to 22deg. C.

This species is widespread in temperate waters and has been recorded in New Zealand, southern Australia, South America, western North America, South Africa, British Isles and the Mediterranean Sea.

The school shark is particularly common in the inshore coastal waters of the South Island where it is well known to surf anglers.

School sharks grow to a length of around two metres and a weight of at least 35kg (77lb). At the time of writing, the International Game Fish Association all-tackle world record for school shark stands at 33kg (72lb 12oz) taken on 24kg gear in the waters of Parengarenga Harbour, Northland, by Melanie Feldman on 19 December 1986.

School sharks may be found from inshore surf beach gutters and harbours, offshore to depths of over 500 metres. During the spring and summer months, large numbers of mature females are found in shallow bays and harbours where they give birth to their young.

This species is an opportunistic predator that appears to hunt in packs. Its prey consists of squid, schooling fish, reef fish, other bottom ﬁsh and crabs.

Fresh fish such as kahawai or yellow-eyed mullet is by far the best bait. Chumming while at anchor will also increase the chances of success.

Large specimens are capable of fast runs and they provide excellent sport on light tackle. The ﬁghting ability of the school shark is rated by most anglers to be a lot higher than a blue shark of equivalent size. Surf anglers will ﬁnd it a very exciting experience trying to extract a big school shark from a beach gutter and through the breaking surf.

The school shark is recognised as a game fish by the International Game Fish Association and as a consequence, world records are recorded for both men and women in the 1kg, 2kg, 4kg, 6kg, 8kg, 10kg, 15kg and 24kg line class categories. At the time of writing, the New Zealand Big Game Fishing Council does not accept New Zealand records for this species, however, this may well be altered sometime in the future.

Female school sharks reach maturity after 8 to 10 years, at which stage they are about 1.3 metres in length. Tagged adults have been recaptured after a period of 41 years, indicating a lifespan of at least 55 years.

Reproduction is ovoviviparous, that is, each embryo shark draws its nutrients from a yolk sac via a yolk stalk, while in the body of the female. Litters of 15 to 43 pups are born after a gestation period of about 12 months, each individual being around 30 centimetres in length.

In New Zealand, school sharks are targeted with longlines and set nets. They are also an important by-catch of the barracouta and jack mackerel trawl ﬁsheries. The 1992-93 reported commercial catch was 2828 tonnes against a Total Allowable Commercial Catch for all areas of 3089 tonnes, as it was then.

The Tasman Sea is no barrier to school sharks. Seven school sharks tagged in New Zealand have been captured in either South Australia or Tasmania and one shark tagged off Tasmania has been recaptured in Foveaux Strait.

Between 1986 and February 1993, 2861 school sharks were tagged and released in New Zealand waters. If any reader captures a tagged shark, it is important that the fork length, weight, sex of the shark is recorded along with the date and location of the capture, and these details (including the name and address of the successful angler) be forwarded promptly to M.A.F. 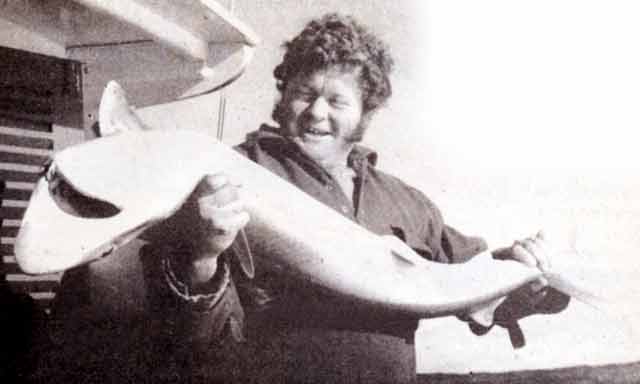 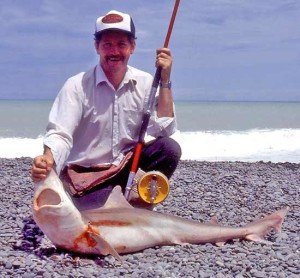 In my experience, the school shark is more commonly caught surfcasting around South Island during the summer months. Specimens taken surfcasting along the Canterbury coast are usually the same size as the more common spiny dogfish.

Tope grow much bigger than spiny dogfish. Large specimens can reach two metres in length and weigh as much as 35 kg. The easiest way to distinguish this shark from the similar-looking smoothhound is that the tope is able to close its eye with a membrane that moves over the eye from the bottom like an eyelid. Dogfish, like almost all bony fishes, cannot close their eyes!

A large tope can fight quite strongly when hooked on light line hence the reason it is regarded by the International Game Fish Association as a game fish. Here is a big tope weighing 16.7 kg caught from the vessel Topgun in the upper North Island and weighed at the Whangaroa Big Gamefish Club. However, it certainly does not fight in the same league as a mako or thresher shark.

I have caught some quite big tope over the years between Birdlings Flat and Dorie just south of Christchurch. Large females come in close to shore to give birth to 30cm long live young over summer. Most of the big ones caught are females. The smaller tope caught surfcasting are juveniles that remain inshore until they grow large enough to move out into deeper water where they school by size.

Fresh mackerel and yellow-eyed mullet are good baits for tope. Any oily fish is best but squid is also good tope bait. Use heavy monofilament or thin wire traces to avoid being bitten off. Tope have triangular teeth designed for holding small fish. They mostly feed on live schooling baitfish such as pilchards and mullet. I have read that they are known to jump when hooked but I have never seen this.

Tope fillets are sold in shops as white fish or flake. You have probably eaten quite a bit of tope over the years as it is one of the main species used in shops sold as fish and chips.