Snapper is by far New Zealand ‘s most popular fish. It is the premium fish all New Zealand sea anglers want to catch the most! They are good fighters and excellent to eat.

We have fished for snapper in the Marlborough Sounds with good success. One thing that stands out to me is that time and tide count when shore fishing for snapper. You can be fishing all afternoon catching a wide variety of different species on the incoming tide with the aid of berley – but no snapper. Then suddenly as the sun begins to set snapper weighing between 2 and 4 pounds start taking our baits. This is much more likely if high tide coincides with sunset. Keep in mind this is in water only a few metres deep – perhaps 5 metres tops. Many anglers wind in their lines and head off home as the sun starts going down without realizing that they are leaving just as the best fishing is just about to begin.

The time of year is also a big factor when it comes to snapper fishing around New Zealand, especially when surfcasting and shore fishing. Snapper fishing is more successful during the warmer months of the year. Snapper are seldom caught by surfcasters in Taranaki during the winter months. Snapper are caught from Gentle Annie beach on the South Island’s West Coast but usually during the warmest months.  Snapper caught on beach longline near Hokitika.  Snapper from Manu Bay, near Raglan. Surfcasters catching snapper on Northland’s Ninety Mile Beach. Waiheke Island – Catching a 21 Pound Snapper. Your best bet is to ask around as to when is the best time of year to fish for snapper in your area. Fishing for this species at the right time and in the right place is by far the most important info to find out. There is considerable variation in the numbers of snapper available to anglers, surfcasters in particular, depending on the location and time of year. You will greatly increase your chances of catching this species if you ask around and study which are the best times to target them in your area.

I have found that plain old frozen squid or frozen octopus will catch snapper as well as any other bait particularly when fishing from shore. I think it is a bit more time consuming for the spotties to strip from the hooks giving snapper in the Marlborough Sounds, for example, where there are a lot of small bait thieves, a better chance of getting to it first! Be sure to have the point and barb of your hook fully exposed as snapper will mouth your baits and spit them out if they detect anything is a miss.

Plenty of other baits are excellent for snapper such as mullet, kahawai fillets, anchovies, pilchards, tuatua and so on. The main problem with these baits is that they attract lots of small “picker” fish that will strip your bait and leave you fishing with unbaited hooks in no time. I have been surfcasting for snapper in the Marlborough Sounds and there has been no action to speak of for an hour or two. Then all of a sudden a big snapper takes someone’s bait and it is all on. Great excitement hits everyone as they burst from partial slumber. The big fish tears back and forth at a great rate of knots with anglers gathering, offering advice and hoping it doesn’t get off, or through the hook! However, you are never going to get to this point unless you can keep your hooks baited.

Using bait elastic helps to hold these softer baits on the hook to some degree. It is worthwhile watching your rod tip carefully when snapper fishing. Small twitching of your rod tip likely indicates the little pickers are eating all your bait. The best thing you can do is wind-in, check and replace your baits and cast out again every five or ten minutes.

When “on the bite,” snapper will swallow almost anything. Conventional wisdom says the best baits are fresh oily fish such as mackerel, pilchards, skipjack tuna, and even small kahawai. Piper are excellent snapper bait as are crabs and shellfish. Big snapper will also go for live-baits. It is worth giving whatever live-bait you can catch a try including mackerel and even smaller kahawai. Back-hooked live-baits fished close to the bottom are known to take the really big “old-man snapper.”

As mentioned above fresh piper, or garfish, make excellent snapper bait but are best used where there are fewer nuisance fish.

Snapper is the only sea bream found in New Zealand waters. A really big specimen can measure as much as one metre in length and weigh as much as 20 kg. Snapper is common to the North Island of New Zealand. They can be found on the West Coast of the South Island as far south as Fiordland. They are also found in reasonable numbers in Tasman Bay and the Marlborough Sounds.

Certain parts of the North Island are known to have smaller snapper, in particular, smaller juvenile fish are found in large numbers in the Hauraki Gulf. Fish on the west coast of the North Island are generally bigger. Forty years ago snapper were caught in good numbers by surfcasters off the beach behind the old railway station at Kaikoura whereas this is unheard of today. Snapper are rare on the east coast of the South Island south of Marlborough.

The fish North Island anglers want to catch the most is a big snapper exceeding the magical old 20-pound mark. Such big fish were once quite common in the upper South Island particularly around D’Urville Island and French Pass. It would, however, be rare to catch a big one like that today.

They were also quite a common catch in the inner Marlborough Sounds as well. Good numbers used to be caught in Kenepuru Sound in particular. They are still there but their much smaller numbers make them difficult to catch.

Healthy Food Guide: Here’s everything you need to know to cook fish to perfection, every time.

This species is caught all around the North Island and are targeted by numerous methods including surfcasting, light tackle boat fishing, jigging, long-lining and in recent years are a popular target for anglers using soft baits. Big fish will take quite large baits including whole live and dead baits, and have been shown to take soft baits well.

Large specimens have been known to exceed 20kg. Adults generally range between 30 to 80cm in length. As snapper age, they often develop a characteristic hump on the head caused by an enlargement of the bony skull crest. 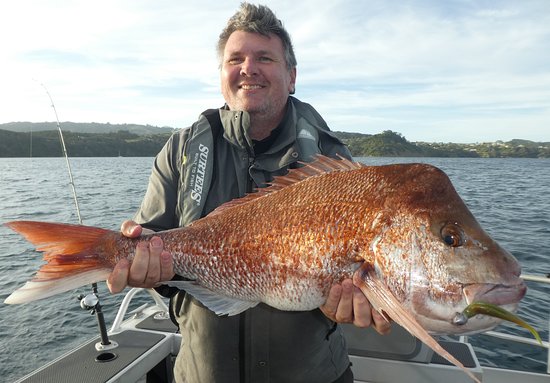 Big old snapper often develop a characteristic hump on the head caused by an enlargement of the bony skull crest. Many anglers refer to these fish as “old man snapper.” This photo of Northside Adventures is courtesy of TripAdvisor.

I have caught all my snapper on a simple paternoster rig with fixed droppers. This is the basic rig I use for surfcasting. Some anglers use very large hooks but I prefer size 3/0 to 6/0 in a chemically sharpened Suicide pattern. When fishing the inner Marlborough Sounds for smaller school snapper I fish from 1/0 to 3/0 hooks. For both shoreline and boat fishing, 15-24kg monofilament is the correct size for snapper. This is heavy enough to prevent needles bite-offs while not being so heavy it scares the fish.

For boat fishing, you can’t go past the old Gamakatsu Snapper Flash rig. This uses the same Suicide pattern hooks with the addition of pink Flashabou.

Soft baits are all the rage nowadays and for good reason – they work. Two of the most popular soft baits for snapper are the 10cm Berkley Lime Tiger Minnow and the 10cm Berkley Nuclear Chicken Jigging Grub. When jigging soft baits your best bet is to fish them close to the bottom.

I have heard from several experts who tell me that fishing soft baits is perhaps the most effective way of catching really big snapper.