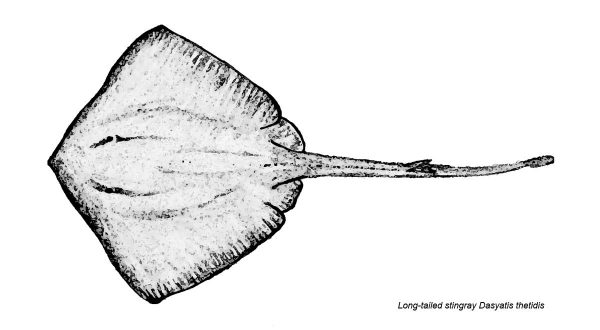 Rays and skates often cause anglers confusion. Let’s take a look at some of the members of the Order Rajiformes and their various differences. This order includes stingrays, eagle rays, skates, electric rays, as well as tropical species such as manta rays and sawfish. Although rays and skates at first glance appear to look very similar, they are quite different when you know what to look for. Stingrays, for example, are nearly always nearly black on top and light grey underneath. The head of the stingray blends into the body.

The head of the eagle ray, by contrast, is at the front of the body jutting forward and rises above the back appearing almost frog-like. The back of the eagle ray is also much lighter in colour and tends to be greenish with dabs of blue.

Skates are more diamond-shaped and have an upper body colour that is usually pinkish-brown and speckled with darker markings. Like the stingray the head of the skate blends into the body barely rising above the back at all. Skates also tend to have wider fleshier tails.

The long-tailed stingray has a whip-like tail which is longer than its body. About a quarter of the way down the tail one or two long serrated barbed spines project from the upper side. On the other hand, the short-tailed stingray has a thicker tail which is shorter than the length of its body. It too has one or two barbed spines which may measure up to 30 centimetres in length.

A Stingray Barb can cause a fatal injury

Stingrays are not generally regarded as dangerous to humans although over the years there have been incidents where swimmers have been killed or seriously injured by their flailing tail barbs.

Stingrays have a habit of resting on the bottom sometimes in quite shallow water. It is thought that swimmers may have accidentally stood on or surprised a stingray in such situations causing it to lash-out in an attempt to escape. Fatalities from stingrays are extremely rare.

Although the spines contain venom and a strike can be very painful, they are usually deadly. When deaths to people have occurred it is when the barb has hit a vital organ. Most notably when Steve Irwin, the Australian wildlife expert, was tragically killed by a stingray barb in 2006 when it pierced his heart

How big can a stingray get

Stingrays can grow to a weight of at least 240kg (500lb) and a width across the flaps of between two and three metres. They frequent shallow inshore waters, particularly harbours, inlets and just offshore of the breaker line on sheltered surf beaches, where they feed on crabs and shellfish. Both species are found in the waters of the North Island and generally, it is the short-tailed stingray that is found in our southern waters. The colouration of the upper surface is usually dark grey, brown or black.

Generally, stingrays are not targeted by anglers, but when they are accidentally taken on a surfcasting outfit, they put up a long and powerful fight. One warm autumn day, while fishing on the bottom inside the mouth of Thompson Sound, one of my crew, Bill Routhan of Hokitika, had a solid hook-up in about 10 fathoms. The fish moved off on a long powerful run, testing the line and my old Penn Sea Boy reel.

We had no idea what Bill was hooked onto until an hour later when the shape of a ray appeared beneath “Samara.” As Bill eased the fish alongside, Pete missed with the gaff and another 20 minutes passed before the ray could be coaxed close enough to be secured. The short-tailed stingray had two spines on the back of its tail, the largest of which was 12 centimetres long. It was an amazing capture on a thin wire hook which had foul-hooked the ray under one wing. The ray later weighed in at 34kg (75lb).

The eagle ray Myliobatus tenuicaudatus is a common species in estuaries and harbours of the North Island where it can be seen basking in the warm shallows or slowly moving along the bottom in search of crabs and shellfish. They are relatively uncommon in the South Island but have been recorded as far south as Poison Bay near Milford Sound. However, eagle rays can be seen in large numbers, particularly at low tide in Westhaven Inlet near Collingwood. 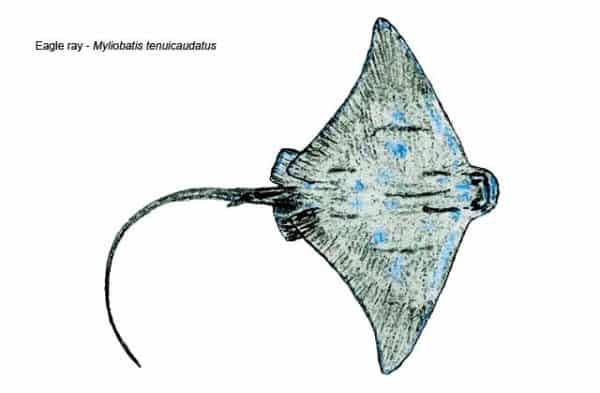 The species can have a wingspan of up to 1.5 metres and is easily recognised by its head which protrudes in front of the swept-back delta-shaped wings. It has a long whip-like tail with a sharply pointed barbed spine protruding from the upper side, not far behind the body. The colouring on the upper surface is greyish brown to greenish-brown with brilliant blue markings.

The eagle ray provides great sport on a light surf outfit or boat rod and generally gives a hard fight with long powerful runs. The largest I have seen would weigh around 50kg (110lb).

There are two species of skates that are likely to be seen by anglers around the coastline of the South Island; they are the rough skate Raja nasuta and the smooth skate Raja innominata.

The rough skate is found in shallow waters on a muddy or sandy seafloor and is commonly caught by surf anglers on the west coast of the South Island. The species can grow to around one metre across the wings, but most of the specimens that I have seen have been half that size.

Three rows of small spines or prickles run down the top side of the tail which does not have the spine or barb that is found on the stingrays and the eagle ray. The colouration on the upper surface is brown with dark marbled patches.

One night while fishing the shallow waters of Poison Bay, I had some great sport fishing for skates with a light threadline outfit. Although only 50 centimetres across the wings, the skates put up a terrific fight on 3kg line with plenty of long hard runs. I landed and released five and lost at least as many.

The smooth skate is not encountered as often by anglers as the rough skate, as it prefers deeper waters. This species grows to over 1.5 metres across the wings and as the name suggests, the upper surface is usually smooth. Colouration is usually grey with dark brown spots.

I have only ever caught two smooth skates, both in Milford Sound. One was a large specimen perhaps two metres across and was taken at the head of the sound near the Sinbad River mouth. It came up from the depths like a grey blanket and after a quick photograph, it was released. 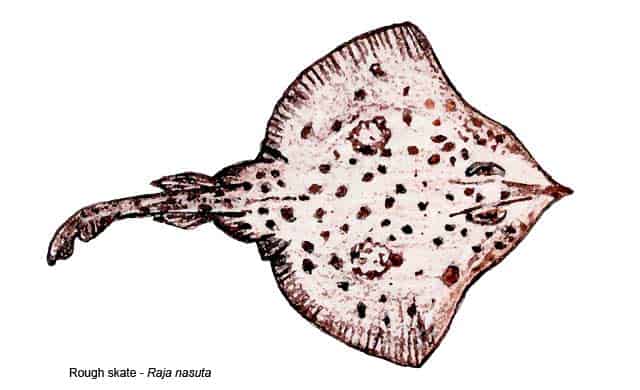 In his book “A Treasury of New Zealand Fishes,” David H. Graham makes mention of one in Milford Sound that was over seven feet in length. He also reports that in 1862, a large skate was caught that was ten feet in length and weighed 4221b. I would imagine that both these fish were smooth skates.

Skate eat molluscs, crustaceans, and various species of small fish likely found on the bottom. Skate will also take fish that have been hooked by anglers lines. Skate is often caught by surfcasters. Here is a skate caught surfcasting by Allan Burgess at Amberley Beach. Few surfcasters would deliberately try to catch skate. If you are attempting to catch one, as you might during a surfcasting competition, then a really long distance cast as far beyond the surf-zone as possible seems to be the way to go.

The wings of both rays and skates are good eating. Skate has a delicate flavour and is very good cooked in a variety of ways but they are not a popular fish in New Zealand. Skate wings are sold in shops which have been skinned with the cartilage still in the centre. Stingrays are not usually eaten in New Zealand although they are popular in other parts of the world.

Electric rays are widespread throughout New Zealand’s coastal waters and although usually seen amongst trawl catches, a few are also taken by line anglers. They grow to over one metre in length and are capable of delivering a severe electric shock. Two species of the blind electric ray are also found in our waters but these are deep water inhabitants and are not likely to be encountered by anglers.

Manta rays are occasionally seen by offshore anglers fishing the northern coastal waters of New Zealand. They can easily be recognised as they swim just beneath the surface by the two projecting horns each side of the head. Mantas are known to grow to at least 6 metres between the wings and attain a weight of at least 2000kg. They feed on small fish and zooplankton and are occasionally seen leaping clear of the sea’s surface. It is very unlikely that this species would venture into the cooler waters of the South Island.

Sawfish are not found in New Zealand waters but are nevertheless a close relative of the rays. The Longcomb sawfish, Narrowsnout sawfish or Green sawfish Pristis zijsron can reach a length of 10 metres of which at least 2 metres is its saw-like rostrum.

So, when you next land a ray or a skate, take a couple of seconds to decide if you are going to use it. Although the flesh on the wings is edible if prepared correctly, it is my opinion that there are better food species in our waters. If you aren’t going to use the fish, don’t kill it for the sake of killing. Instead, show a little mercy and release your catch. The text of this article has been extended by Allan Burgess.