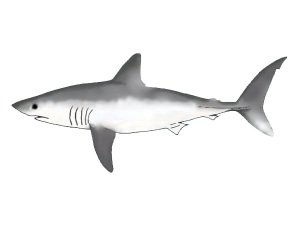 The porbeagle shark, like the mako and the great white shark, is a member of the Lamnidae family (mackerel sharks) of warm-blooded sharks. They are able to maintain their body temperature around 10 degrees C higher than the surrounding water temperature. This higher core temperature makes it possible for them to swim faster, and maintain higher speeds for longer. This extra speed is a considerable advantage when hunting other fish and sharks as prey.

This particular shark prefers cool temperate waters ranging between 4 and 16 deg C, this being a cooler range than the mako and the great white. It is found in the North Atlantic, from South Carolina to Newfoundland, and from North Africa to Norway and Iceland. It is also found in the Mediterranean, as well as the temperate cool waters of the Southern Pacific. It follows migrating fish such as mackerel, cod, and bonito tuna. It also eats flounder, dogfish, hake and other species that are eaten much less by the mako and white shark. The porbeagle shark is perhaps less known than the mako and great white but is nonetheless regarded as a strong fighter when taken on rod and line. Like the mako, it is also known to jump on occasion when hooked. It is recognized by the International Game Fish Association as a game fish.

Successful fishing methods are similar to the mako shark. The porbeagle will take both trolled lures and live or dead fish baits, particularly when fished in a berley trail.

The porbeagle, mako and great white are all quite similar in their outward appearance. They are round-bodied, powerful, strong swimming sharks. However, there are a number of subtle differences by which the observer can tell these species apart.

The colouration of the porbeagle differs only slightly. The back is blue-grey or brown, fading down to the belly, which tends to be off-white.

The porbeagle is a pelagic ocean-going shark. It does occasionally come close to shore. There have been examples of porbeagles being caught in nets in Otago Harbour.

David H. Graham in A Treasury of New Zealand Fishes describes the stomach contents of porbeagle sharks caught at North Reef, off the Otago coast, contained squid, groper, whiptail, Javelin-fish, and tope shark, while those caught by trawlers and examined had been devouring pilchards, mackerel, small smoothhounds (sharks), and small spiny dogfish.

Porbeagle shark is reportedly good to eat with the flesh being much like that of swordfish.

The body of the porbeagle is heavy and spindle-shaped with a shark conical snout. Unlike its relatives the white shark and the mako which have a single caudal keel stabilizer, the porbeagle has two such keels each side of the tail.

Porbeagle teeth are similar to those of a mako except that they have a small basal cusp on each side. Small free-living and embryonic white sharks also have a small cusp on both sides of the base of the teeth and retain these for about a year after birth. They could, therefore, be confused with porbeagles
if only the tooth shape was considered. Surprisingly, embryonic porbeagles do not have tooth cusps, these obviously develop after birth.

The upper surface of the body is dark bluish grey or greyish black, while the underside is abruptly white. The rear tip of the dorsal fin is white and the large eyes are black.

A similar species is the closely related salmon shark Lamna ditropsis which is restricted to the North Pacific Ocean. This shark also has secondary caudal keels on the tail and basal cusps on the teeth. It can be identified from the porbeagle by a shorter snout and dark blotches on the underside. The salmon shark has not been recorded south of latitude 35deg. N.

The porbeagle prefers water colder than 18deg. C. In northern latitudes, this species has been caught in waters of only 2deg. C.

Porbeagle sharks are found in the North Atlantic Ocean, the Mediterranean Sea and the Tasman Sea, as well as around the coastlines of the British Isles, South Africa, the southern portion of South America, South Australia and New Zealand, generally below latitude 30deg. S.

The foreign tuna longline ﬂeet catches porbeagles in most offshore areas around New Zealand, ranging from well north of the Three Kings Islands to south of Snares Islands. Locations, where they have been regularly taken (because that is where the fleet works, rather than because that is where porbeagles occur), are off Cape Runaway to East Cape, off Gisborne, Westland, Fiord-land and southwest of Stewart Island. Information from those involved commercially longlining for hapuku and bass indicates that at times, porbeagles are common out of Jackson Bay, South Westland where they may be seen on the surface and taken deep on longlines.

Anglers intending to fish for this species off the Otago Heads are well-advised to read the account on porbeagles in David H. Graham’s “A Treasury of New Zealand Fishes.”

Size and age of maturity of porbeagle sharks are not known in New Zealand, but have been estimated in the North Atlantic: males 1.5-2 metres, 3-6 years; females 2-2.5 metres, 6-9 years. As with most shark species, females are larger at maturity and reach a greater maximum length than males. The porbeagle is reported as reaching 3.65 metres in length and weighing over 230kg, however, specimens over 2.5 metres are apparently rare. At the time of writing, the International Game Fish Association All-Tackle World Record for porbeagle shark is 210.92kg (465lb) taken on 60kg gear in the waters of Padstow, Cornwall, England by Jorge Potier on 23 July 1976. All but one of the current I.G.F.A. line class world records have been taken from British waters. As yet, no porbeagle sharks have been entered as records by the New Zealand Big Game Fishing
Council.

The porbeagle is an oceanic pelagic species that at times may be found on the continental banks and in inshore coastal waters, on the surface to depths of at least 350 metres. This species most probably frequents our coastal waters throughout the year.

British anglers fish for porbeagles by both trolling dead fish baits and deep drifting live and dead baits while chumming. I consider drifting baits in conjunction with chumming to be the most productive method for New Zealand anglers keen to catch a porbeagle. Anglers intending to fish for this species should initially consult with those who fish commercially in areas known for porbeagle captures. For example, those who commercially pursue hapuku and bass out of Jackson Bay will be able to give information on what months are the most promising and where porbeagles have historically been seen or captured.

Stand-up tackle in the 15kg and 24kg I.G.F.A. line classes would be ideal for porbeagle fishing. It goes without saying that steel trace material is required and traces should be as long as is legally allowed under the I.G.F.A. regulations.

Surprisingly, this powerfully built shark is reported as being sluggish when hooked on game fishing gear. It does not leap in the spectacular manner of its relative the mako and instead tends to lug it out deep beneath the boat. When the fight draws to an end, the porbeagle tends to roll on the leader and many are lost close to the boat as a result of this.

The porbeagle is recognised as a game fish by both the International Game Fish Association and the New Zealand Big Game Fishing Council. This species is a member of the mackerel shark family (Lamnidae) and as with the white shark and mako, its body temperature is 7-10deg. C above that of the surrounding water.

Porbeagles produce young after an unknown gestation period. The embryos obtain nourishment by way of a yolk sac (ovoviviparous) and by feeding on fertilised eggs while within the body of the female (uterine cannibalism). This grossly extends the body of the embryo. At 38-40cm, the yolk comprises 70-75 per cent of the embryo’s weight, at 45-50cm, 50 per cent; and at 65-70cm, only 20 per cent. Length at birth is probably 70-80cm. The number of young produced is nearly always four.

Although regarded as potentially dangerous to man, no proven attacks have been recorded. Dr Malcolm Francis of the Greta Point Fisheries Research Centre is presently researching the breeding biology of porbeagles and he is keen to obtain the following information from any angler who happens to catch one of these sharks.

Total length, fork length, precaudal length (snout to pit in front ‘of tail fin), or all three for sharks and/or embryos. Sex and weight if possible. Place, date and depth of capture. Note whether the shark was caught at the surface over deep water (they seem to be pelagic in behaviour).

For embryos, same data, plus the number of pups found in the litter, sex ratio, length of yolk stomach if obviously distended. Photographs also if at all possible. Send information to Dr Malcolm Francis, Fisheries Research Centre, P.O. Box 297, Wellington.

I am indebted to Dr Malcolm Francis and Clinton Duffy (Department of Conservation, Napier) for providing me with information which has been included in this article.