It was attracted to the boat by a berley slick.  There are some very big mako sharks off the Canterbury coast.

The Canterbury Sport Fishing Club was very active during the early 1990s. At that time they would organize club shark fishing competitions. This involved members using berley out at sea, off banks Peninsula and Kaikoura, to attracts sharks to their boats. Although some big specimens were caught and taken back to Lyttelton many were also tagged and released after being taken on both bait and the fly rod in different line classes.

It was very interesting and often surprising just how many sharks would be attracted to the berley at times. The method was to pour berley over the side to create a continuous stream at the rate of a cup or so very minute. The berley was a mixture of fish offal (that had been through a mincer), fish frames, and sometimes blood. This would be diluted with water and stirred in buckets to be ladled over the transom. A crew members would be a assigned the task of maintaining the berley trail.

Fishing around 5 km off Lyttelton Heads sharks would be attracted to the boat in a short time – perhaps less than an hour. On other trips, it might take 4 or 5 hours. This far out off the coast the water colour is dark blue almost black whereas the sea closer to the Canterbury Coast is more of a milky green colour as a result of run-off from the land and water flowing out to sea from rivers including the Waimakariri and Rakaia. 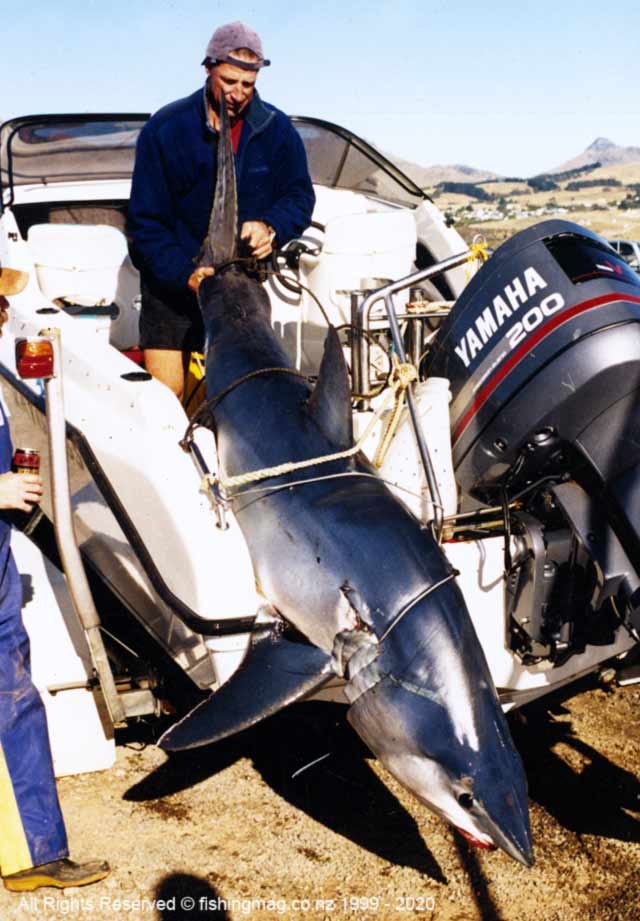 During this time it was vital that the berley trail be maintained at an even constant rate. It was always interesting to watch and wait while looking into the inky blackness. In the great vastness of the ocean, how would sharks find such a minute trail of fish particles. A shark’s sense of smell is truly incredible.

Eventually, the first customers would begin to arrive. In my experience fishing, both off Otago and Canterbury, the first on the scene would always be the blue shark. We would spot one and then another soon after. Before long there might be a dozen or more blue sharks of different sizes visible from the boat.

The blues were often very inquisitive swimming right up to the boat. They general moved quite slowly in a sort off lopping motion as if to conserve energy. The blue sharks would also be quite unafraid of us or the boat. Crew members would try to lower the bait or a saltwater fly to an individual shark. Frequently it would be necessary to pull the bait from the water least it be taken by another less sort after target. Even when one of their mates became hooked the other blue sharks didn’t seem to care and generally carried on as before. Throughout it was essential that the berley slick be maintained or the blues would loose interest and disappear from the drifting boat into the distance.

With luck a mako would finally arrive on the scene. The mako sharks were generally more stand-offish. It could also be difficult to target a mako with so many blues around. Sharks appear to give way to size rather than species. The arrival of a big mako close to the boat would send the other smaller sharks scattering.

Once hooked a mako would sometimes not seem to notice at all. Then suddenly it would roar off with immense power. The makos would take much longer to bring in during which time they would power off and sometimes jump clear of the water. A blue shark of similar size had the fighting qualities of a wet gumboot.

The one thing you would never do is bring a mako shark into the cockpit no matter how dead it might look. Even a small mako in the boat is no laughing matter. They go absolutely crazy thrashing and crashing about!

This was over twenty years ago. Shark hunts have now mostly become part of history. Conservation of sharks is now the highest priority.