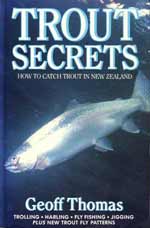 Trout Secrets – How to Catch Trout in New Zealand

Jeoff Thomas is perhaps best known in New Zealand for his very good series of fishing videos; the most popular of which was Snapper Secrets. In recent years he has also been a regular on television with a weekly fishing programme. In an earlier life, Geoff Thomas was a professional trout fishing guide at Rotorua for twenty years.

Some of the book’s chapters include A Short History of Trout and Salmon, Dry Fly and nymph, Fly Fishing on Lakes, Harling and Trolling, Deep Trolling, Old Man Eel, Spinning and jigging, Bait Fishing, Catching a Trophy Trout and Commonly Used Knots.

Trout Secrets the book (he has also made a video with the same name) contains plenty of interesting stuff for the trout angler willing to try something a bit different such as lake jigging and deep trolling. Jigging was all the rage for sea fishing around New Zealand in the early 90s. However, it was an unusual technique for trout fishing.

Trout Secrets is an excellent New Zealand fishing book by someone who really knows what he is talking about. Interestingly it hasn’t dated at all in the decade since it was published. The original price was NZ$29.95.