South, Bob – Masters of Flytying – No.3 in the Fish & Game New Zealand Collection 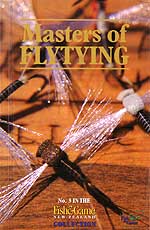 No.3 in the Fish & Game New Zealand Collection

Masters of Flytying is, as the name suggests, a book about tying flies. It calls on the expertise of three of the best in the world in this craft – Ngongotaha’s Hugh McDowell, Turangi’s Peter Church, and Murchison’s Peter Carty. This intrepid trio have combined over the last 13 years and 72 issues of Fish & Game New Zealand magazine to produce a regular Masters of Fly tying column, which is devoured by many of the more than 200,000 enthusiasts who read the publication and who have fallen to the rather innocuous, but esoteric ‘art’ that is creating your own flies.

McDowell has had his flies featured in Patterns of the Masters, The Art of the Trout Fly and Fly Patterns and The Complete Guide to New Zealand Trout Lures. He is the author of a book New Zealand Fly-Tying.

Church is a universally respected angler, guide and was once ranked by an elite American flyfishing magazine as one of the top five guides in the world.

Carty, the only one of the three still guiding full time, is recognised as one of the World’s premier contemporary fly tyers, having been published in John Roberts’ book, World’s Best Trout Flies. Carty also is one of Umpqua Feather Merchant’s fly tying consultants, having developed a host of patterns used internationally, among the Carty’s Coloburiscus, Carty’s Passion Vine Hopper, Carty’s Onisigaster Nymph, The Mountain Mayfly, and Carty’s Stonefly.

McDowell, Church, and Carty combine to present the background, materials and tying instructions for 23 different patterns, all of which are proven trout catchers in New Zealand and around the globe.