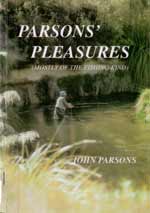 “John Parsons’ latest book reflects the wide-ranging appeal of trout-fishing and the diverse fishing pleasures of its author.

Everything about trout commands John Parsons’ respectful attention. Here among dozens: of essays and vignettes, he probes the Zane Grey legend, tests unlikely lures, explores the founding of Taupo’s rainbow fishery, spends a nostalgic few days in England along rivers he knew intimately 50′ years ago, talks of fishing books and fishing people, examines trout-flies, and attacks shags, developers, and anglers’ apathy. Those are just a few of the many matters he weaves into and around the numerous stream, river and lake fishing experiences he takes us to.

Apart from the occasional lapse, Parsons’ Pleasures is not a how-to-do-it and where-to-go book, although it could be said that here and there useful tip or two is present for the taking.

For John Parsons, fishing can only be really appreciated in the presence of unspoilt countryside and the birds inhabiting it. Some of those birds, and insects too, both at home and by the waterside, appear now and again throughout his book.
The author has been going fishing for more than sixty years. But he knows he has always remained an apprentice and will never become a master. He is expert in enjoying fishing, though and has written about that enjoyment since his teen-age years in England. This is his tenth book.