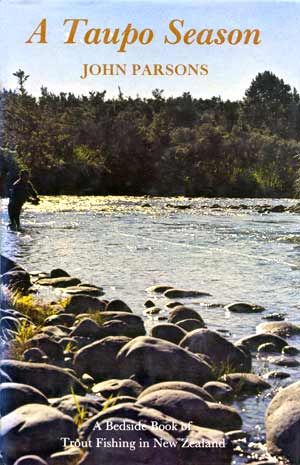 The author is one of these people. He also loves to write about ﬁshing for trout, and his writing is informed and informative, stimulating and always entertaining. The book contains 85 dissertations on almost as many different trout-ﬁshing topics — to name only a few, he writes of great ﬁshing personalities, the restoration of lakes, tackle catalogues, sublunarism and astrology as debatable factors in success, the improvement of casting techniques, the wickedness of willows, taxidermy, trout psychology, ﬁshermen’s lib, local and international ﬁshing literature — the list goes on and on.

Although written and set mostly in the Taupo area, the great majority of the material is applicable to any other part of New Zealand and, indeed, to any waters of the world where anglers pit their skill against rainbow and brown.

Though intended as a book to be dipped into for relaxed reading, much of it gives food for serious thought. Not all ﬁshermen will agree with every one of john Parson’s conclusions, but this is one of the charms of his approach: he puts his point of view in terms that set one thinking — and what can be more pleasant than thinking about ﬁshing for trout?

Mr Parsons is by profession a photographer, so it is not surprising that the quality of his illustrations matches that of his writing.

JOHN PARSONS believes he is one of the luckiest men alive. Thirty years ago, as a coarse-ﬁsherman in England, he could only read and dream of Taupo trout. Now, after six years of Taupo residence following twenty years of existence in Wellington (relieved by trout-ﬁshing at Taupo and elsewhere), his dream has come abundantly true. Not only this, he’s made a vocational dream come true too, marrying photography to the writing that has meant so much to him, and others, since his ﬁrst contribution to the old Fishing Gazette of England.

His creative work and his responsibilities to his home and family keep him busy – but never so busy that he can’t ﬁnd time for ﬁshing, or writing about ﬁshing, or photographing ﬁshing, or running some ﬁne ﬁshing book to earth (his ‘small’ collection of angling books must be one of the ﬁnest in the country).

John Parsons is a foundation member of the Taupo Fly-ﬁshers’ Club and a vice-president of the Federation of Lake Taupo Angling, Shooting, and Boating Clubs.