Orman, Tony – Spin-Fishing for Trout and other Fish 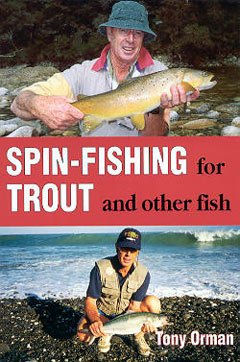 Spin-Fishing for Trout and other Fish

Spin fishing for trout has been scorned by some fly fishermen as “chuck and chance” and as “unsporting.” This book sets out the truth that spin fishing is a versatile, successful and sporting way to catch trout and other fish, such as light tackle saltwater species.

Success depends to a large degree, on the approach and attitude of the angler, A vital part is utilising the versatility of spinning tackle and Tony Orman sets this out in concise, easy-to-understand style, by showing that spinning can utilise not only conventional lures but the very artificial flies whether streamer, dry fly or nymphs, that its critics use.

Spin-Fishing For Trout and Other Fish opens a whole new world that many spin fishermen never suspected. The underrated perch and saltwater species such as the spectacular kahawai, tarakihi, trevally, snapper and other sea fish are great sport on spinning tackle.

Tony Orman has had published over a score of books on the outdoors – among them definitive works such as Trout With Nymph, The Challenge of Fishing Small Streams, 21 Great New Zealand Trout Water and Fishing the Wild Places of New Zealand. In two instances royalties were donated to sport fishing lobby organisations reflecting his involvement over the years in fighting for the public’s recreational fisheries, both freshwater and saltwater. He has fished extensively throughout both the North and South Islands.