A Natural History and Guide 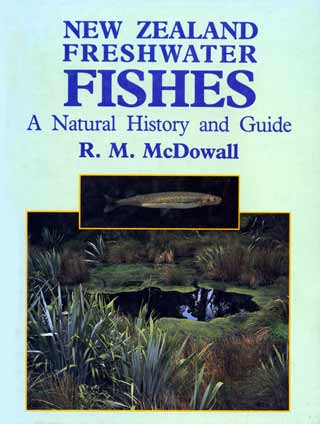 “New Zealand Freshwater Fishers” is the most comprehensive book on the subject available, summarising all that is known about both native and introduced species. First published in 1978, it has been thoroughly revised and updated in the light of the numerous scientific studies that have appeared over the last decade.

Fifty-three fish species found in New Zealand waters are included: 27 native, 20 introduced and six ‘marine wanderers’. Special attention is given to identification, with keys, descriptions, lists of diagnostic characters, numerous line drawings and over 250 photographs, 79 of which are in color. In addition, there is a distribution map for each species and a summary of what is known about its natural history.

New Zealand Freshwater Fishers is designed to meet the needs of anglers, scientists, amateur naturalists and general readers. Anglers will be most interested in the large trouts and salmons, but there are many, smaller, equally interesting fishes to be found in the rivers and lakes of New Zealand.

This book ends with a discussion of the human impact on our freshwater fisheries. As a result of deforestation, pollution, dam construction and other factors, several species are at risk of becoming extinct. Native fish may be less appealing to most people than kiwis or kauris, they are a part of our ecological heritage and, argues the author, worthy of protection. It is hoped that this book will allow many new Zealanders to discover a fascinating and little-known fauna.

The late Dr. R.M. Mcdowell was a scientist with MAF Fisheries group of the Ministry of Agriculture and Fisheries.
ISBN 0 7900 0022 9 First published in 1978. Revised edition published 1990. Published by Heinemann Reed. Hard Cover.

Also by Ron McDowall Gamekeepers For The Nation – The Story of the New Zealand Acclimatisation Societies, 1861-1990