Many a Kiwi fly fisherman has begun his first steps into tying his own flies with the aid of this excellent little book. McDowell covers all the basics needed to get you started in this absorbing hobby. Beginning with the tools required and a closer look at the materials used. He also asks “why bother tying your own flies today?” One good reason is that streamer flies sell in many of the tackle stores for as much as NZ$3.50 each! You can make your own for perhaps ten per cent of this price.

Most important of all you can’t beat the sense of achievement that comes from catching fish on flies you have tied yourself. Over time as you tie more flies and become more practised you won’t be able to tell the difference between your own ties and bought flies.

All the popular flies are covered including Lures (streamers), Hackle, Matuku, Pukeko and killer styles. Plus dries, wets and nymphs. There is also a little on saltwater flies.

Excellent line drawings and photographs illustrate the text showing you just how it is done. There is an index of patterns at the back of the book. This is by no means complete. However, if you can tie all the patterns in the book you will have little difficulty tying any other fly you might wish to create.

The new edition is essentially the same book reproduced in a larger format.

I’m sure that New Zealand Fly Tying – The ten-thumbed beginner’s guide by Hugh McDowell, has sent countless anglers in the right direction as fly tyers. Many, like myself, will have gone on to a lifetime of tying their own trout flies. It was reprinted six times before a new edition was created in 2001 – something that would be very unlikely today in the internet age.  Allan Burgess 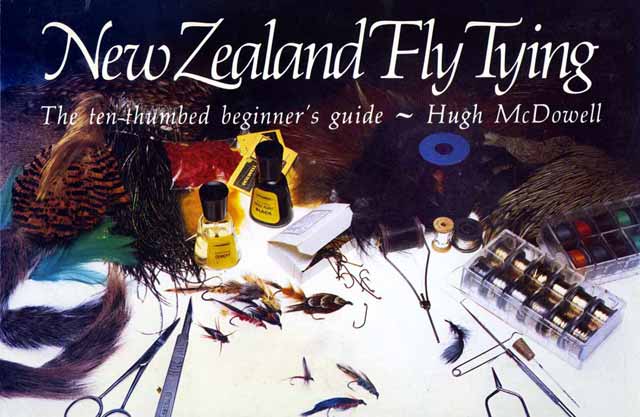