McDowall, R.M. – Gamekeepers For The Nation

Gamekeepers For The Nation – The Story of the New Zealand Acclimatisation Societies, 1861-1990 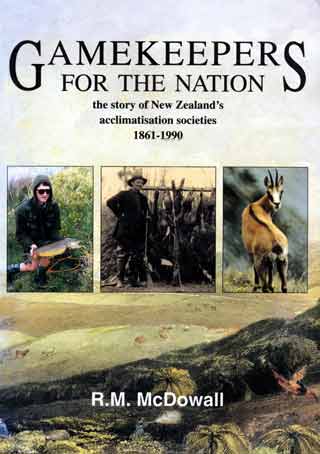 New Zealand ‘s famous recreational hunting and freshwater fishing are based almost entirely on introduced birds and animals. Trout, salmon, deer, most game birds, and most other shooters’ and anglers’ quarry were imported from their native habitats to stock the sportsman’s paradise of New Zealand.

In Gamekeepers for the Nation NIWA scientist Bob McDowall tells the story of how these animals were introduced, nurtured and managed, and outlines how they have affected the lives and the environment of all New Zealanders. From opossums and red deer to brown trout and Canada geese, frogs and sparrows, he recounts 140 years of enriching New Zealand’s fauna – and in some cases the subsequent problems of pest control. In a lively and readable, often humorous style he describes the activities of acclimatisation societies and fish and game councils, and their often unsteady relationships with government agencies administering wildlife and fisheries.

Gamekeepers for the Nation will be of interest to all who fish, hunt, enjoy the outdoors or otherwise, take an interest in their natural environment and heritage.

Dr R.M. McDowall is one of New Zealand ‘s foremost biologists, having worked for many years with the Ministry of Agriculture and Fisheries (now with Ecosystems Division of the National Institute of Water and Atmospheric Research (NIWA). His speciality is the ecology, natural history and taxonomy of New Zealand freshwater fishes, in particular, whitebait, and his work has for many years given him a close involvement with the acclimatisation societies and fish and game councils. He is a fellow of the Royal Society of New Zealand and the author of numerous scientific papers and books, including New Zealand Freshwater Fishes and The New Zealand whitebait Book.