Kelly, Greg – The Flies in my Hat – A book about trout fishing in New Zealand 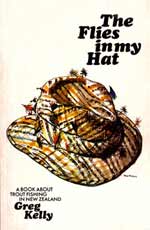 Greg Kelly was born in 1887, caught his first trout in 1907, and wrote The Flies in my Hat at the age of 79. Between times he was the manager of a sporting goods business in Auckland and Rotorua, served on Auckland and Waimarino Acclimatisation Societies for many years and was also an honorary ranger.

Greg also found the time to write a column for The New Zealand Fishing and Shooting Gazette during the 1930s and 1940s, and later a book about his lifetime of experience with firearms The Gun In The case published in 1963.

The Flies in my Hat is a collection of stories by an angler with more than six decades of experience with a fly rod in hand. One staggers to think how many fish he must have taken during that time! Kelly didn’t just fish the rich trout waters of Rotorua and Taupo. He also cast a dry fly in Mid-Canterbury, Nelson, Southland and the West Coast of the South Island.

Though not a how-to-catch trout book as such it does nevertheless contain much that will have the brown trout angler looking at the river, his surroundings, and other anglers differently. Perhaps with a more open and enquiring mind!