Holden, Philip – The Golden Years of Fishing in New Zealand 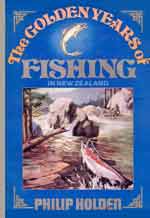 The Golden Years of Fishing in New Zealand

“For novelist Zane Grey, and countless other enthusiasts who visited this country in the 1920s and 1930s, New Zealand was `the angler’s El Dorado’. The famous trout fishing waters of Lake Taupo and the Tongariro River, the salmon rivers of the South Island, and the deep-sea fishing grounds of the Bay of Islands were renowned for the exhilarating sporting experiences and prolific catches they afforded.

Through fishermen’s stories extracted from old books and popular magazines, such as the Auckland Weekly News and The New Zealand Fishing and Shooting Gazette, Philip Holden has gathered a selection of tales, anecdotes and boasts, to bring to life `the golden years of fishing’ from the beginning of European settlement until the 1930s. They convey the zeal and often fanaticism that anglers have for their sport, but they also show something of the camaraderie and gentlemanly ethics that are so important to fishermen.

This collection, interspersed with over 150 splendid photographs, will have a far-reaching appeal as it offers glimpses of sporting life in the old days the highly organised camps, the fishing lodges, the guides and gillies and portray many of the characters who have become legendary in angling circles.”