Ferris, George – The trout are Rising – Including a guide to the trout waters of New Zealand 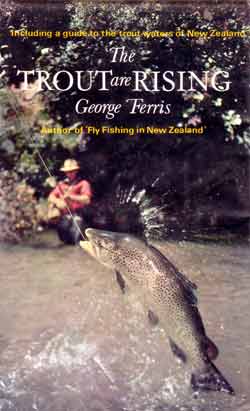 The Trout are Rising

The Trout are Rising is a revised and updated version of the author’s previous book Fly Fishing in New Zealand. A part of the book is devoted to teaching the new chum how to cast. There is information on rods, reels, lines and so on. Following this is a chapter about South Island High Country Lakes, then advice on when to fish, fly selection, lure fishing and the smelt.

This book looks back to the introduction of brown trout into New Zealand in 1868. On to the rise and rise of the fishery up to about 1925. The largest brown trout recorded in New Zealand weighed over 37 lb. Huge limit bags of trout were taken on the fly, with many fish over 20 lbs. This was once so common that no one spoke of it. The quality and quantity of food available to trout in those days were such that growth from fry to 3 lbs could and did occur in just one year.

The second part of The Trout are Rising contains a descriptive account of the principal waters of both the North and South Island. Aimed perhaps more towards the overseas visitor. Nonetheless, parts of this section will be of interest if only to make the comparison with today – some four decades later.

An interesting chapter is entitled “The Migration of the Browns.” In this Ferris talks about the decline of the Selwyn River in Canterbury – arguably once the best trout fishing water in the Dominion! He suggests that the fishery went into rapid decline around 1930. Interestingly he also says that “…of the mortality of trout it is my considered opinion that one-fifth only is due to angler pressure, one-fifth to predators, including poachers, and three-fifths to natural causes.”

He goes on to talk about the Acclimatisation Societies (the forerunner of Fish and Game Councils) cross-breeding River Trout and Sea-run Trout to create a hybrid strain that is mostly sea-run. This has according to the author resulted in a considerable decline of the brown trout fishery in some waters. While in places like the Mataura River in Southland, which has such strong nursery tributaries that natural reproduction has been phenomenal, outstripping any artificial means of propagation.

The Trout are Rising is an interesting book despite its age. George Ferris certainly seems to know what he is talking about. Available second-hand in good condition for around NZ$60.00