by Fred Wilkins with E.V. Sale 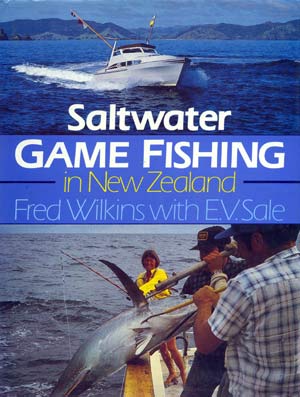 Saltwater Game Fishing in New Zealand. New Zealand’s offshore waters contain some of the best game fishing grounds in the world, an opinion borne out of the number of record catches made here.

Saltwater Game Fishing in New Zealand covers the full range of game fish species, from the small fish such as kahawai and trevally to the biggest – the great marlin and sharks – from cotton-thin lightest line upwards.

Written by one of New Zealand most experienced game fishermen with a leading writer on outdoor subjects, it tells of many famous catches of record fish caught in local waters. It is also full of entertaining and informative advice and fishing methods, boat handling, the best gear, useful tips. Latest developments in the sport covered in full.

There are details of New Zealand game fishing clubs and current record fish weights. Each fishing area is fully described, with useful maps.

A fascinating feature of the book is its emphasis on ethical and speaks of the school, on conservation, on the importance of research into fish habits, habitats and survival.

Author, Fred Wilkins is one of New Zealand’s best-known game fishing boat skippers, his experience of the sport covering half a century. His deep and intimate knowledge makes this a book no New Zealand fisherman will want to be without.

Fred Wilkins is one of New Zealand’s best-known game fishing personalities. He has been involved in the sport as a charter boat operator, owner and skipper, as angling coach and as a gear designer for over half a century. Well-known boats he has designed and skippered include Sou’East, Nor East, Nor’West, and Sea Runner, and he has pioneered several deep sea fishing techniques.

He once boated 106 marlin in 60 consecutive days of fishing, including eight marlin in one day on four different occasions. He believes he is the only skipper to have released 70 marlin in one season.

Fred Wilkins retired from commercial participation in the sport around 1970.