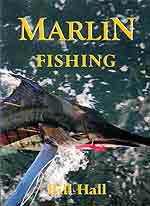 Bill Hall is one of the few people who is truly a legend in his own lifetime. As owner and skipper of the boat Te Ariki Nui he has rewritten the New Zealand and IGFA (International Game Fish Association) record books for marlin.

He has skippered or caught 19 world records. He was the first in New Zealand and probably the world to land 10 marlin in one day, all 100kg plus. In 1996 he won the Champion Game Boat for the season with 75 marlins, breaking the record that had stood since 1946. In 1997 to prove it was not a fluke he caught 85; with 80 tagged and released all on lures.

For most of the last forty years, he has fished as an amateur, only making Te Ariki Nui available for charter since 1995.

He has featured in and written for Marlin Magazine in the USA. His exploits have been the subject of numerous articles and have featured on TV in the USA, Europe and New Zealand.

In this, his long-awaited book, he not only recounts many of the great captures but more importantly sets out in detail his methods and techniques in a style that anyone can follow for successful marlin fishing.