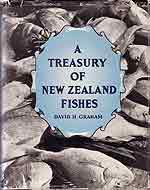 A Treasury of New Zealand Fishes

“This profusely illustrated volume is the life-work of a scientific observer and investigator, and it is at the same time a fascinating book to read. Fishermen will agree that the subject provides endless pleasure by the fireside as well as in practice, and Mr Graham’s work is pre-eminently a fireside book.The author provides a wealth of information and anecdote which have come from the personal experience of a man who was in love with the hobby that became his profession.

This book is The Compleat Angler for which New Zealand enthusiasts have long been waiting and, like that famous classic, it is a treasury of scientific observation and information in addition to the entertainment which is afforded in its pages.

Every fish mentioned in the book is illustrated, and there are over 150 plates from photographs and line drawings.”

“This book is full of interesting observations made by the author particularly during his work early last century when he was appointed biologist to the Marine Fisheries Investigation Station, Portobello, in Otago Harbour.

Graham’s comments about how once it was possible to catch groper inside Otago Harbour are very interesting. Many believe that groper is a deep water species. This is so only in that they are long-lived and the shallow water fish have all been caught!”

I find Graham’s book, although parts of it are now quite dated, to be both very readable and most enjoyable. He makes interesting statements such as “Elephant fish had a greater economic value during World War I than in 1930-34.” He tells many anecdotal stories such as the time a large ling was washed up on a Dunedin beach obviously having died because it had swallowed a large crayfish whole which had pierced its stomach!

I also like Graham’s book because it has a strong southern New Zealand flavour resulting from his research work as a resident biologist operating mostly out of the Marine Fisheries Investigation Station at Portobello in the 1930s. The station had its own launch the Karoro skippered by an expert fisherman Mr Sid Broadley. Together the two men would go out together trawling, dredging and fishing in Otago waters.

Graham would investigate the stomach contents of large numbers of fish from many species and make careful note of their diets at different times of the year. He would also bring back live fish, of different species, and place them in the outside concrete ponds at the Portobello station where their behaviours could be closely observed. From this, he was able to learn a great deal of information that would otherwise be difficult, if not impossible, to obtain.

David Graham also investigated the stomach contents of many commercial caught fish as well. Here is a typical example.

“In the nurse sharks and dogfish which include in their diet a large proportion of crabs, the teeth are small, pointed or flattened and are adapted for grinding and crushing matter rather than for cutting. In skates and stingrays, the teeth are nearly always small, blunt and arranged in pavement fashion with several rows in use at once. In the large spotted eagle ray, the dentition consists of a single row of long bars arranged one behind the other backwards in each jaw. Its food consists almost entirely of oysters and clams and the crushing power of the jaws is truly remarkable. Clams which, with their shells, must have weighed over three pounds and crack with a pressure of perhaps a thousand pound would be required, have been found in the spotted eagle rays stomach crushed in scores of pieces.”

Keep in mind that David Graham covers some 140 New Zealand fish species in this 400 pages book. Then you get some idea of what a substantial volume of work this is.

A Treasury of New Zealand Fishes is no longer available new. You will have to search around old second-hand bookstores for a copy. I got mine from Smiths Books in Christchurch some years ago. It was published in September 1953. My copy was in mint condition when I got it, signed by Graham, and dated October of the same year. I’m ashamed to say that my copy is now “scruffy” at best. So many times have I pawed through its pages the dust cover is a wreck.

A timeless read, this book is a “must-read” if you are serious about learning as much as possible about New Zealand’s sea fish species.