Angus, John – Confessions of a Billfisherman 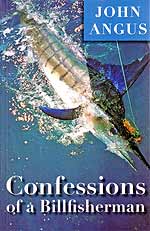 John Angus is a dedicated billfisherman who has fished all over the world. He moved the family to New Zealand four years ago just to enjoy the South Pacific’s great bill fishing. His success as a billfisherman is almost without equal in New Zealand, with well over one hundred billfish tagged and released including blue, black and striped marlin, broadbill swordfish and short-billed spearfish.

Inside this book of “confessions,” you will find exciting tales of battles with marlin to well over 1000 pounds and arduous struggles with unseen monsters in the darkness, the “Holy Grail” for all billfishermen the gladiatorial broadbill swordfish. The long hours of trolling, the determination required to fish far offshore come rain or shine, the urge to fish for the giants of the oceans and those divine moments of madness when a marlin strikes the lure are magnificently captured in this book by a gifted author.

A student of the history of big-game fishing, the author has produced a list of the biggest and most important rod and reel captures of broadbill swordfish since fishing began for them in the early 1990s. For the first time ever, this unique and historically fascinating record is published in this book.