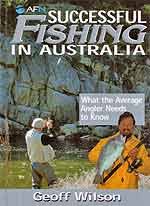 Geoff Wilson is probably best known in New Zealand for his excellent series of books on knots and fishing rigs. Geoff has been fishing since the early 1960s and has done just about everything in fishing. He was a leading pioneer of land-based game fishing for sharks, tuna and kingfish in New South Wales in the mid-1960s. He has fished extensively in the tropics and has written many books and magazine articles on fishing.

Successful Fishing in Australia is a practical book aimed at both the novice and the more experienced angler wishing to broaden their horizons towards other less familiar species, and the techniques employed to catch them. The text includes a list of species, together with the recommended terminal rig, and the best strategy for catching them. The illustrations are very good indeed. There are very good colour pictures of the various species and many line drawing of the required rigs.

There is a chapter on freshwater fishing. This is by no means extensive but it does seem to cover almost every aspect of fishing for trout including bubble floats, trolling, and natural baits and so on. The author also looks at other freshwater species to be found in Australia , both native and introduces fishes.

I like this book. It is unpretentious and includes the sort of advice that will get you catching fish even if you have never been fishing in your life before. Particularly interesting is the advice about catching bait and fish from estuaries, lagoons and sheltered bays. This is where many anglers start out. But these are also the sort of fishing places to which many later return. After all these years I still enjoy catching yellow-eyed mullet on a small fly of baited hook. Indeed the ability to catch whatever fish are there at the time is what being a successful angler is all about.

I know this is a book about fishing in Australia but most of the information in its pages is equally applicable to New Zealand . There are also plenty of interesting ideas that many anglers will not have seen before such as “berley at the beach” when surfcasting with a berley cage, and an interesting shark hunting technique which involves a bag of sand, large eel bait rigged with several game hooks and a large game fishing reel.

This is a very good book that would make a more than useful addition to any angler’s library.