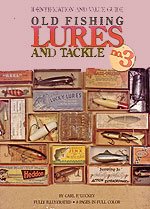 This superb volume is chiefly about early artificial fishing lures manufactured and sold in America between 1890 and the early 1950’s. There is a somewhat shorter, though extremely interesting, section on early fishing reels, as well as a listing of old fishing rods.

There are some metal spoon lures together with some that are best described as a combination of various materials such as feathers, hair, and so on, however, the great majority are what we in New Zealand would describe as wooden plugs or minnows. I guess it would be fair to say that many would have been used to target bass in the United States, but this is by no means exclusively the case with many lures included in the book that was designed to catch Tarpon, Snook, Trout, Salmon, Chub and numerous others. They would have worked equally well on saltwater species but were aimed mostly at lake and river fish.

This large handsome volume is very well illustrated with black and white photographs that bring the text to life. Along with manufacturing dates, construction methods, hardware, colours the lure came out in and so forth, the author has sort to give the reader an indication of the approximate value of every lure included. Obviously, this 3rd edition is now some fifteen years old and values will be out of date. On the subject of value, it is interesting to note that a lure is more sort after and valuable if it still has it’s original packaging. So perhaps we should all start keeping the box that our lure came in. You never know it could be worth something one day!

By way of example, a Kinney’s Bird Lure patented 20 September 1927 by Herbert A. Kinney and made by the Old Hickory Rod & Tackle Co, Tampa , Florida. Assembled and painted by the James Heddon’s Sons of Dowagiac, Michigan. This particular lure has a red wing black bird finish. According to the author, it was worth somewhere between US$400 and $500 back in 1991.

For any angler who fishes with lures, or indeed anyone, angler or otherwise who enjoys collecting them this is the encyclopaedia on the subject. Old Fishing Lures and Tackle is a fascinating book that will provide countless hours of reading enjoyment. It is also a ready reference both for the collector and anyone interested in making or fishing with lures.