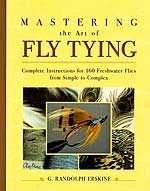 Mastering the Art of Fly Tying

Complete Instructions for 160 Freshwater Flies from Simple to Complex

If you only own one book on “how to tie flies” then this should be it. With Mastering the Art of Fly Tying by G. Randolph Erskine even the complete novice will be able to look at any fly and quickly work out the method required to create it. Although the book contains instructions for 160 freshwater flies the most important feature is the way the author describes how to go about tying the various fly groups: drys, wets, nymphs and streamers, along with many others.

Most anglers new to fly tying are worried their rough looking first attempts won’t fool even the dumbest of fish. This fear is quite without foundation. I promise you that so long as the fly is about the right size and colour it will take fish.

A few years back I gave a good mate of mine a handful of Yellow Rabbit Lures. We used these big streamers for catching sea-run brown trout in the Waimakariri River , near Christchurch , New Zealand , in the spring. I was very proud of my Yellow Rabbits. Each was a work of art with its red tag, pearl Mylar whisks, and peacock sword topping. My mate, who has never tied his own, always purchased his flies from the tackle shop. He was very careful with each one and would sometimes go to surprising lengths to retrieve a fly caught on the bottom or in the willows. He is much older than me and an expert fish catcher!

Anyway one evening he was cleaning up, as usual, taking more fish than anyone else. Having just landed another silver sea-run brown trout of about four pounds, he said; those Yellow Rabbits you gave me work very well. He then showed me the one he had just caught the fish on. It looked nothing like one of the beauties I had given him. All the hair had worn off the rabbit strip, all the Mylar had long since gone, and the thing had no colour at all to speak of. He informed me that he had dipped it in the blue stuff used to clean his toilet to liven it up a bit. In fact, it didn’t even look like a fishing fly at all. It was, however, about the right size and shape to mimic the silveries (baitfish) the trout were chasing. His expert hands did the rest. That incident left a lasting impression on me. How you fish the fly is at least as important as the fly itself.

Shop bought flies are regularly “over tied” with too much material to attract the angler. So long as your home-tied flies are about the right size and shape they’ll work. Trust me on this!

This book is a meaty volume of 352 pages containing hundreds of colour pictures. Many of the pictures show the step by step process to follow for tying each type of fly.

The book starts out with the basics of tying, tools required, and the materials needed. It moves on through many different types of fly including grasshoppers, spiders, Woolly Buggers, Pheasant Tail Nymphs and the like, to more complicated ties such as Tandems, Matukas ( New Zealand ), hair bodies, Classic Dries, Mouse and Frog. The final section moves on to salmon flies for advanced tyers. This is a ripper! It covers spun and clipped salmon flies, hair wings, feather wings, and many different Spey flies. There really is an enormous amount of information in this book which will have the fly tier reaching for it again and again!

The author’s love of fly fishing and fly tying began as a teenager and remained strong all his life. He worked as a lawyer in Wallingford , Connecticut , for over 50 years. Dissatisfied with the poor quality of fly tying books available he actually started work on Mastering the Art of Fly Tying at the age of 88, completing it just before he died on 8 August 2006 at the age of 93.