Cropp, Ben – Blood in the Water 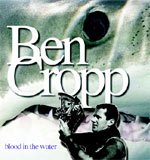 Blood in the Water

Ben Cropp was one of the world’s legendary “shark hunters”. The fearless spear fishing champion could kill sharks using only a spear. When Ben started filming his extreme underwater adventures, the films sold worldwide. In 1965, Ben had a close encounter with the largest of all sharks – the giant, but gentle, whaler. After that, the self-confessed “old pirate” became a prominent conservationist. He is now known as Australia’s best-known skin-diver and underwater filmmaker.

Blood in the Water tells the story of Ben Cropp’s life underwater, complete with his stunning award-winning pictures of the deep blue. See the aftermath of a shark attack on his inflatable dingy, read about his closest call with man-eating sharks, and view the scars after (self-inflicted) stings from the deeply feared box jellyfish.

As well as recounting his most dangerous moments, Blood in the Water tells how Ben has helped conserve his precious underwater environment. In 1967 he received the last ever letter written by Prime Minister Harold Holt, who went missing while swimming off the Victoria coast. The letter was instrumental in establishing the Great Barrier Reef Marine Park Authority, now recognised as the most successful of its kind worldwide.

Ben’s life story is inseparable from giant sharks, gaping jaws and trails of blood in the water. After a career spanning 50 years, Ben Cropp tells his complete, no holds-barred story for the first time through his amazing pictures. A fascinating biography of a lifelong love affair with the deep blue and all of its deadliest creatures.

About the author…
Ben Cropp has produced 150 marine and wildlife adventure documentaries. In 1964 he won the coveted world underwater Photographer of the Year award, following in the footsteps of his heroes Hans Hass and Jacques Cousteau. Ben has the Order of Australia AM for his marine and coastal conservation work. In 2000 he was inducted into the International Scuba Divers Hall of Fame. His two sons, Dean and Adam, appeared in many of Ben’s films. Both are now professional cameramen. Ben lives in Port Douglas.

Shark Facts: Only about one-third of shark attacks are fatal. 58 people were attacked by sharks in 2005, but only 4 of those attacks were fatal.  From 2001-05, only 4.4 people per year on average were killed by sharks worldwide.  Humans kills about 100 million sharks per year. Proven man-eaters: White shark (white pointer) Tiger shark, Whaler shark (includes Bull shark).