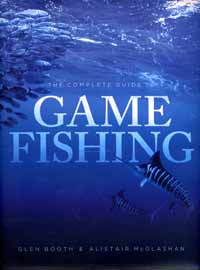 The Complete Guide to Game Fishing

by Glen Booth and Alister McGlashan

The Complete Guide to Game Fishing. Once the domain of anglers with big expensive game boats, game fishing today is possible in even a trailer boat.

Once the domain of anglers with big expensive game boats, game fishing today is possible in even a trailer boat. As a result, move and move anglers are discovering the delights of offshore fishing and catching huge fish from small boats.

Armed with The Complete Guide to Game Fishing, you will know how to find, identify, hook and ultimately catch (or release) the game fish in our waters, from huge black marlin to small tuna… and everything in between.

Divided into two parts, The Complete Guide to Game Fishing begins by describing in detail and revealing in photographs the characteristics and behaviour of 30 game-fish. The more knowledge you have about the habits and behaviour of the fish you are hunting, the more success you will have finding it, enticing it to take the bait and landing it.

The second half of the book covers the equipment and techniques needed to be a successful angler. From buying the right game reel and fishing line to being shown in step-by-step photographs on how to rig a trolling lure or wind-on leader, everything is covered for setting up a safe and successful game fishing boat.

The Complete Guide to Game Fishing

This book is also about learning and appreciating the ocean and the miraculous life that exists below the surface. Today, game fishing is as much about tagging and releasing fish so they can be tracked for scientific research as bringing home the catch to eat. There is a chapter on photography so a record can be kept of the fish you’ve battled with and landed, as well as a recipe section for those fish caught for the table.

Authors Glen Booth and Alister McGlashan are two well-known fishing writers with many decades of bluewater fishing experience between them.

Al spends more than 200 days a year on the water. He contributes to dozens of magazines, both locally and internationally, does weekly fishing reports for radio stations, has authored four books on fishing, and produced the ground-breaking Strikezone DVD range, which is now a TV series. He donates time to assisting fisheries research, visiting schools, and is a government advisor on sustainable fishing.

“The Complete Guide to Game Fishing is beautifully illustrated with a huge number of tremendous photographs sure to excite any angler. There are excellent colour photographs of the important game fish, baits, tackle, lures, rigging and much more. This large hardcover book packed with such high-quality photographs and game fishing advice will definitely not disappoint any angler who purchases it without having seen it first – Allan Burgess, editor Fishingmag.co.nz”

Glen has visited many of the world’s game fishing hotspots as an angler, deckhand, writer and photographer. He has been a key figure in the fishing media for over 25 years, including editing Modern Fishing, the National Australian Fishing Annual, and Barra, Bass and Bream Digest.