Aqua Jet has many advantages

Another problem associated with big, heavy jet boats is that once beached they can take con­siderable strength to drag them back into the water. For this reason, many salmon anglers who are getting on in years are hesitant to take their boats out unless there are younger blokes along to help them out of any difficulties. It is all too easy with a jet boat to take a wrong turn, and suddenly end up high and dry! A receding tide can also leave your jet boat without water under the keel.

Aqua let inventor and designer Peter Keir, came up with a brilliant new design concept that brings jet boating within reach of the average salmon angler! Peter’s design utilizes an existing 1600cc Suburu car motor to power his new purpose-built 150mm jet unit, model AJ-150. The end result is a lightweight rig that tips the scales at a mere 310kg.

1. It is much less costly to manufacture.

2. The lightweight Aqua Jetboat only requires a small 1800cc car to tow it!

3. The Aqua jet can easily be manoeuvred on land or water by one man.

4. It is very cheap to operate. The Suburu 1600cc motor produces about 90hp, runs on ordinary petrol, and burns little fuel in comparison with a conventional V8 powered jet unit.

Peter was a keen salmon angler and built the Aqua Jet with the salmon angler firmly in mind. Salmon fishing requires a jet boat that is relatively inexpensive to own and operate, is safe to use, and will do all that is asked of it with the minimum of fuss and bother. The Aqua jet is all these things and more.

Peter tells didn’t like noisy engines. To this end, he incorporated some very clever elements into his hull design. Firstly the motor is completely enclosed by an insulated cover to keep the sound in. This cover opens back­wards so that access can be gained while still on the water if required. Secondly, Peter incorporated an air intake into the bow molding. The airflow from which is ducted under the floor reducing engine noise still further.

Peter was a fitter and turner by trade with over twenty years of engineering experience. The last seven years or so have been devoted to Peter’s twin passions of salmon angling and jet boating. Some years back he even produced and experimented with a small jet unit that was powered by a 25hp two-stroke engine fitted to an 11-foot boat, before finally settling down to the Aqua Jet 90hp design.

According to Peter, the whole secret lies in the impeller and jet unit design. It must be built to match the intended power plant in order to produce an efficient unit. “Get it wrong and all you get is milkshakes! he said.

Peter and I headed off to the Waimakariri River, near Christchurch, for a much anticipated “on the water test.” We had been waiting for the river to clear after extensive discolouration.

At the Waimakaririr I noted the ease with which the Aqua Jet could be launched, certainly no problems here. After don­ning lifejackets, taking a few photo­graphs, and making final checks, we headed upriver. It was a beautiful Canterbury mid-summer’s day with a blue sky, and the mighty Waimakariri clearing from green to blue. With three of us in the boat, the Aqua Jet took off with effortless acceleration upstream. With the warmth of the sun and wind on our faces and a clear view of the snow-capped Southern Alps in the distance ahead, it struck me that one should never underestimate what great fun it is to go for a ride in a jet boat, salmon angling or not! This thing is going to be a great toy for impressing your kids and mates alike!

Under Peter’s expert hand the Aqua jet cruised upstream across ripples, runs, and likely salmon holes. The little 1600 Suburu motor just a murmur beneath its insulated cover. As we banked slightly around the corners I could see that the hardest part of salmon angling with an Aqua Jet would be deciding where to stop and cast a line first. We were so spoilt for choice. I could see excellent salmon water around every corner!

There is a knack for navigating a braided river by jet boat that is quickly learnt and improves with experience. Picking the best path is made easier by standing up at the helm for a better view. Curiously, all-jet boats are left-hand drive. Exactly why this should be we didn’t know. Peter suggested that it could be because boats pass on the left-hand side and having the helm on the left enables a better view!

The standard of finish on the Aqua Jet is very high. There are also many parts, particularly those associated with the motor and jet unit, that are custom made after considerable work, experimentation, and improvement. These include parts such as cast alloy water cooled jacketed exhausts, engine mounts, alternator mounting bracket, the nozzle steering, aluminium bronze grill, cast aluminium intake, and sand trap which act as a pressure reducing valve.

The actual jet units themselves are available in two forms: either for use molded into the hull, as in the boat shown in the pictures, or as a separate bolt-on unit for use with other hulls.

Peter was certainly on to a winner with the Aqua Jet 12’6″ jet boat. 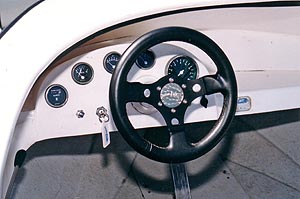 The all-up towing weight on the galvanized trailer is 475kg.

At Fishingmag.co.nz we get our GoPro Cameras and Accessories from NZ Camera, at The Hub, Hornby Mall, Christchurch. (03) 349-7898